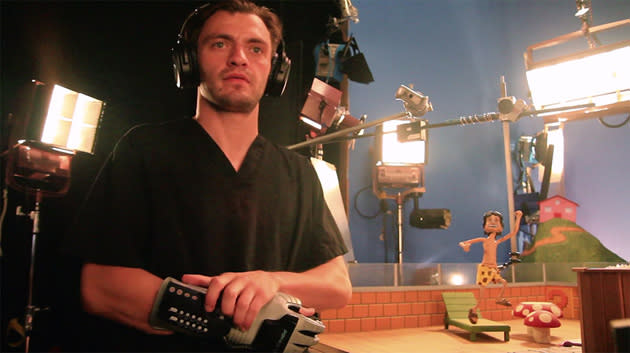 Mattel's legendary-but-finicky Power Glove has been used for seemingly everything but playing Nintendo Entertainment System games as of late, and that trend isn't about to slow down in the wearable tech era. Witness animator Dillon Markey: he's using a heavily modified version of the glove to produce stop-motion TV shows like Robot Chicken. The newly Bluetooth-equipped controller lets him navigate his production software without having to carry a tethered remote or walk over to a PC, which is a big time-saver when it already takes minutes to perfect just a single frame of video. The augmented gauntlet also has retractable tweezers to manipulate tiny stop-motion figures, and there's even an Easter egg (we won't spoil it) that Markey can use to say how well his work is going. This isn't the best use of the Power Glove we've seen in showbiz (that honor will always go to Lucas in The Wizard, of course) but it's proof that there's still some life left in Nintendo's original motion control system.

In this article: controller, dillonmarkey, gaming, glove, hdpostcross, mattel, nes, nintendo, pes, powerglove, robotchicken, stop-motion, stopmotion, video, videogames
All products recommended by Engadget are selected by our editorial team, independent of our parent company. Some of our stories include affiliate links. If you buy something through one of these links, we may earn an affiliate commission.