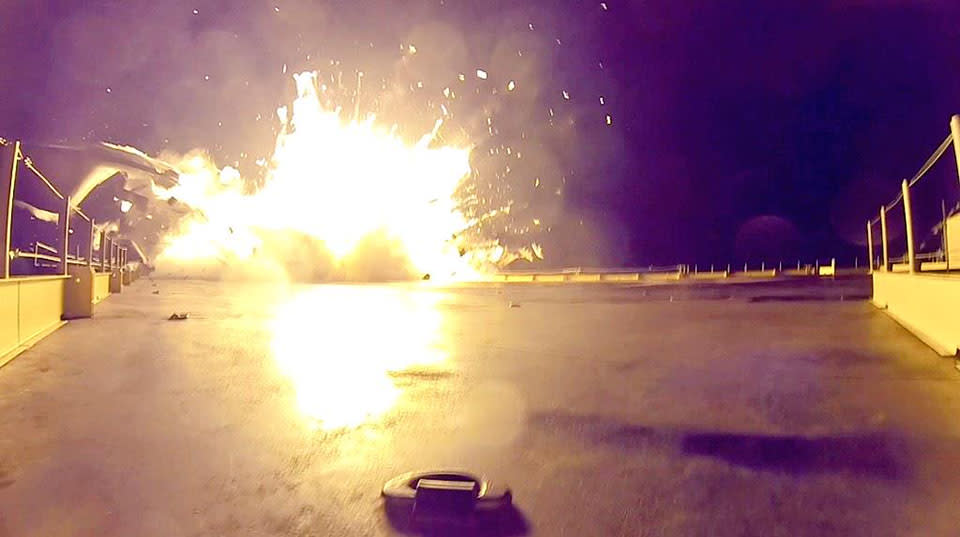 Elon Musk has just tweeted the first photos of the Falcon 9's "close but no cigar" hard barge landing to fellow rocket enthusiast and Oculus VR evangelist John Carmack. After saying the frames were "kinda begging to be released," he tweeted out four of them, amusingly recounting the progress of the doomed 14-story-tall ship. The problems started when the rocket section's fins "lost power and (went) hardover," which the engine couldn't counter, resulting in a 45 degree angle crash into the deck. All hell broke loose after that, as "residual fuel and oxygen combine(d)," followed by a "Full RUD (rapid unscheduled disassembly) event," aka a fiery explosion.

Update: SpaceX has provided us with a Vine showing the entire crash landing, which shows how fast it went from "looking good" to "oh crap." We promise it does not disappoint -- check it out below.

Usually explosions aren't good, but it meant that the ship's' first stage actually found it's way to the relatively tiny barge after soaring over 50 miles into space. Since the chain of events happened because the control fins ran out of hydraulic oil just before landing, NASA will just need to add more next time to prevent a repeat. Musk was never optimistic about the chances of success anyway, given the difficulty and fact that it's never been tried before. SpaceX is trying to make launches cheaper by recovering the first stage, and the experiments don't affect the rocket's ISS resupply missions in any way. Though the Falcon 9 didn't stick the landing, it certainly nailed the rest -- we'd give it a solid '9' with a few extra style points for the explosion.

In this article: Elon Musk, Falcon9, Recover, Reusability, Rocket, SpaceX
All products recommended by Engadget are selected by our editorial team, independent of our parent company. Some of our stories include affiliate links. If you buy something through one of these links, we may earn an affiliate commission.