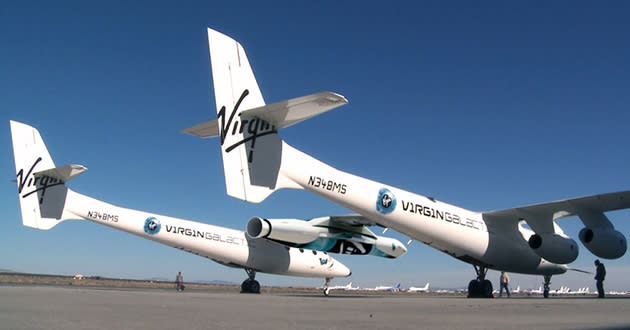 Remember satellite internet provider Iridium's mid-'90s debacle? We're not sure Richard Branson does, as he and mobile chip giant Qualcomm are determined to help launch another internet satellite venture. In his usual low-key style, Sir Branson declared that the two companies will create "the world's largest ever satellite constellation" as the main backers of a startup called OneWeb. The idea is to launch 648 tiny satellites into low-earth orbit using Virgin Galactic's Launcher One program to bring telephone and internet to "billions of people" in underserved areas. Launcher One is a commercial satellite offshoot to Virgin Galactic's space tourism venture.

The elephant in the room for the new launch, of course, is the recent crash of SpaceShipTwo.

Branson figures that the program will "help make... frequent satellite launches (possible) at a much lower cost and greater reliability." The Launcher One rocket is boosted to 51,000 feet aboard the WhiteKnightTwo (above), from where it can launch lightweight, sub-500 pound packages into a near-earth orbit using much less fuel than conventional rockets. The elephant in the room for the new launch, of course, is the recent crash of SpaceShipTwo, which killed a pilot and seriously set back the program. That led to questions around the safety of the program, though Branson is adamant that the company took all necessary precautions.

But Launcher One is less risky for humans, and OneWeb wants to use clusters of satellites and spectrum to open up phone and internet to parts of the world with no access. Branson said the venture would keep Virgin Galactic busy with the "biggest order ever for putting satellites into space, adding "the company will have launched more satellites than there currently are in the sky."