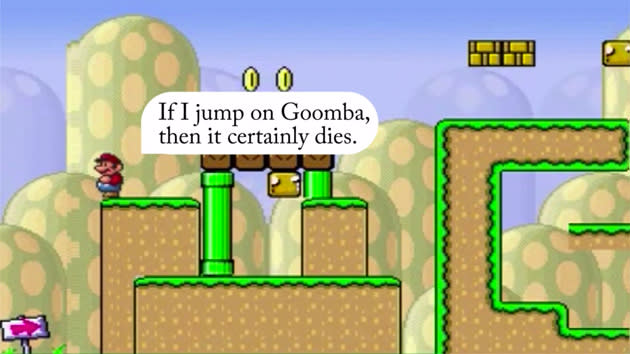 As fun as Super Mario Bros. games are to play, wouldn't it be nice if you could coach from the sidelines every now and then? The University of Tubingen has developed an artificial intelligence that lets you do just that. Its Mario AI project makes Nintendo's plumber both aware of his environment and responsive to your advice on how he should behave. You can teach him that stomping on Goombas will definitely take them down, for instance. Mario even has his own systems for feelings and needs. He'll explore the world if he's sufficiently curious, and he'll chase after coins if he's "hungry."

The concept of a computer-driven Mario isn't completely new, and it's doubtful that this AI will get so smart that it's performing speed runs. However, the research shows how cognitive computing can help in games and other situations where you'd want software to adapt to unexpected conditions. If techniques like this catch on, you could see in-game enemies that learn to counter your moves, or autonomous cars and robots that can adapt to new hazards based on your suggestions.

In this article: ai, ArtificialIntelligence, carnegiemellon, games, gaming, mario, marioai, sphinx, supermariobros, supermarioworld, universitattubingen, universityoftubingen, video, videogames
All products recommended by Engadget are selected by our editorial team, independent of our parent company. Some of our stories include affiliate links. If you buy something through one of these links, we may earn an affiliate commission.