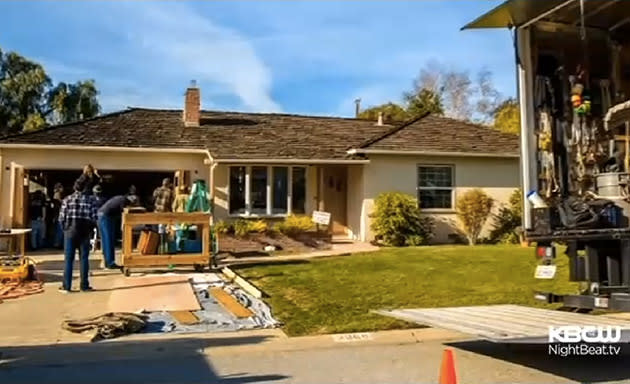 Aaron Sorkin's adaptation of Walter Isaacson's Steve Jobs biography (aka the new one that doesn't star Ashton Kutcher) has been fraught with difficulties, but by the looks of it, filming has finally begun. Last Friday, CNET caught a glimpse of the film crew prepping the garage at Jobs' old home, which is known for being Apple's birthplace... even if Wozniak admitted that it was just "a bit of a myth." The house is somewhere in Los Altos and is just one of film's locations around California, including several spots in Silicon Valley, of course. This adaptation went through the wringer since Sony snapped up the book's rights in 2011, as proven by the emails found among the gigabytes of data leaked by Sony Pictures' hackers late last year.

Those emails revealed that when original lead star Christian Bale backed out, Sorkin wanted Tom Cruise to play the part. He also protested that he didn't even know Michael Fassbender when he was cast as Jobs instead. The execs' conversations showed how deeply troubled the project was as a whole and why the movie ultimately had to be sold to Universal. At this point in time, Fassbender's still attached to the project, with Danny Boyle (of Slumdog Millionaire fame) at the helm. Original director David Fincher (Social Network) dropped out early last year due to financial and creative disagreements with Sony.

In this article: apple, dannyboyle, film, MichaelFassbender, movie, sony, sonypictures, stevejobs, universal
All products recommended by Engadget are selected by our editorial team, independent of our parent company. Some of our stories include affiliate links. If you buy something through one of these links, we may earn an affiliate commission.