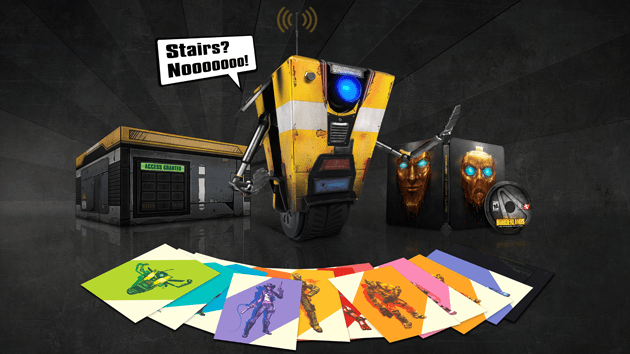 No, the trend of recycling games for modern consoles isn't over yet -- if anything, it's gathering steam. Gearbox and 2K have unveiled Borderlands: The Handsome Collection, a bundle that spruces up both Borderlands 2 and Borderlands: The Pre-Sequel (along with their downloadable content) for the PlayStation 4 and Xbox One. If you buy the garden variety $60 edition when it arrives on March 24th, you'll get the obligatory improved graphics, cross-platform saved games and four-way split-screen cooperative action. They're nice touches, although it's hard to see a die-hard fan buying this role-playing influenced shooter a second time just for those perks. This is more for first-timers who missed what all the fuss was about.

However, Gearbox isn't stopping there. It's going all-out with a bonkers Claptrap-in-a-Box Edition that (you guessed it) includes a frickin' robot. If you're so devoted to Borderlands that you're willing to drop $399 on a port, you'll get a camera-equipped miniature Claptrap that you remote control from an Android or iOS device. This special edition is pretty clever and limited to 5,000 copies, so you'll definitely have something to brag about to the fan club. It does beg the question, though: If the company could lavish so much attention on The Handsome Collection, couldn't it have rolled some of that development time into the true sequel players have been asking for?