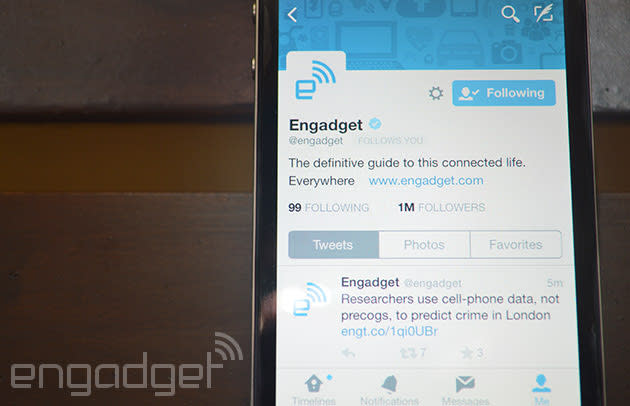 In December 2014, Instagram overtook Twitter's monthly active user number. Well, someone from Twitter must have found that alarming, because the microblogging website is now urging its most prolific users not to tweet out links to Instagram photos. In a screenshot obtained by Mashable (embedded below the fold), you'll see the splash page the company's showing its power users, asking them to post their pictures directly on the website. A source confirmed to the publication that Twitter unleashed the prompt to a number of notable entertainment, media and sports accounts, in part to remind them that the website does have native photo editing tools and to show them how those work.

Yes, Twitter does have its own photo editor and filters, in case you've been too busy crossposting pictures to notice. They were even launched around the same time Instagram killed off Twitter photo integration. But, and we're sure you'll agree, people still choose to crosspost Instagram content even if they show up as links instead of actual pictures, because, well, it's just more convenient that way. It's unclear if the rest of us will see the same prompt in the future, but for now, Twitter's likely hoping its influential clientele can set an example, so to speak. In this article: instagram, SocialMedia, SocialNetworking, twitter
All products recommended by Engadget are selected by our editorial team, independent of our parent company. Some of our stories include affiliate links. If you buy something through one of these links, we may earn an affiliate commission.