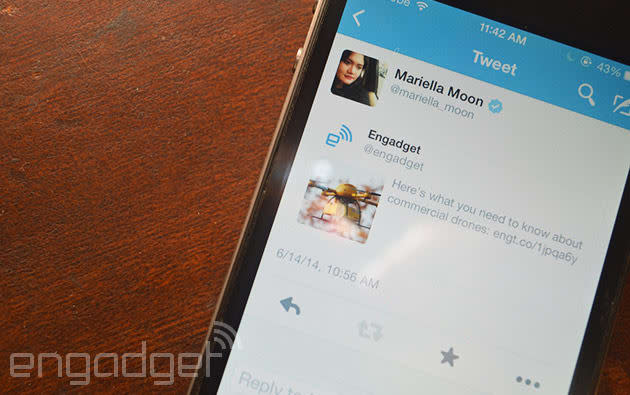 At its heart, Twitter seems to be suffering from some sort of existential crisis, struggling to work out if it's a social network, a messaging service or a publishing platform. Today sees the company launch two features that, if we're honest, only really tick the second and third items on that list. Starting from now, you see, users can host group direct messages with those in your social circle that can only be seen as a broadside on services like WhatsApp. The other big feature, meanwhile, is that Twitter's mobile apps will now let you record, edit and share 30-second videos straight to your timeline.

First up, there's group messaging, a feature that CEO Dick Costolo first teased as "whisper mode" back in May last year. Essentially, it works just like any other group-messaging application, letting you rope in a quantity of people to chat behind closed doors. It doesn't matter, either, if the people you invite don't follow each other, but each one will be notified when they've been added to a group and when a message has been sent.

Second, the mobile app's built-in camera will now let you shoot, edit and upload clips of up to 30 seconds straight into your timeline. Presumably in addition to any social component, the offering will enable journalists, broadcasters and advertisers to add video to tweets in a more elegant way than what's currently in place for sports highlights. Of course, the move does raise some questions as to the fate of Vine, the Twitter-owned video service that lets users record six-second (mostly comedy) clips. In an interview with Re/code, Twitter's Jinen Kamdar said that the two platforms did different jobs: Vine being purely for "entertainment" while the mothership's offering will be "stronger and richer" for things like breaking news.

Both features will be rolling out to users across the next few days, but you'll be able to participate in group chats and watch video clips created by those further ahead in the queue than you.

In this article: Direct Messaging, DirectMessages, Mobile, Twitter, video, Vine
All products recommended by Engadget are selected by our editorial team, independent of our parent company. Some of our stories include affiliate links. If you buy something through one of these links, we may earn an affiliate commission.