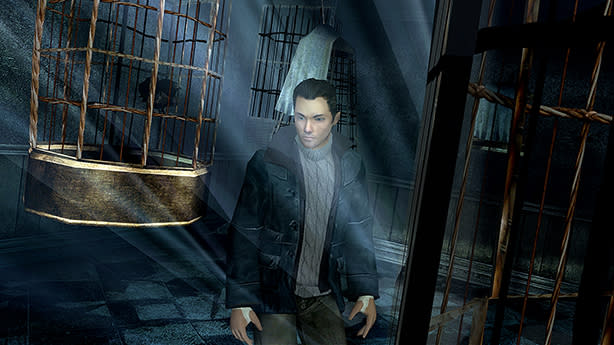 The "definitive version" of Quantic Dream's Indigo Prophecy is now available on PC, Mac and Linux via Steam as well as iOS. Crafted by porting specialist Aspyr Media, the updated version of the "supernatural murder mystery game" goes by the name Fahrenheit: Indigo Prophecy Remastered as a nod to the 2005 adventure's European name. Players can download it for $9.99 (€8.99 / £6.99).

Aspyr noted in its FAQ that there is "absolutely no cut or censored content in this version" of the game. Fahrenheit: Indigo Prophecy Remastered features updated graphics that can be toggled on and off on the fly and controller support across all platforms. While the Heavy Rain developer's original game was capped at a resolution of 1024 × 768, Aspyr said the remastered version supports native resolutions up to 2880 × 1800. Aspyr claimed it "gave every texture in the game a facelift," giving some elements four times the detail as the original game, but the 2 GB size limit on iOS forced remastered textures to only double in size in the mobile version. While it won't provide a release date just yet, the developer did add that an Android version of Fahrenheit: Indigo Prophecy is in the works.
[Image: Aspyr Media]
In this article: aspyr, Aspyr-Media, Fahrenheit, Fahrenheit-Indigo-Prophecy, Fahrenheit-Indigo-Prophecy-Remastered, Indigo-Prophecy, indigoprophecy, ios, ipad, iphone, linux, mac, mobile, pc, quantic-dream, remake, remaster, remastered, steam
All products recommended by Engadget are selected by our editorial team, independent of our parent company. Some of our stories include affiliate links. If you buy something through one of these links, we may earn an affiliate commission.