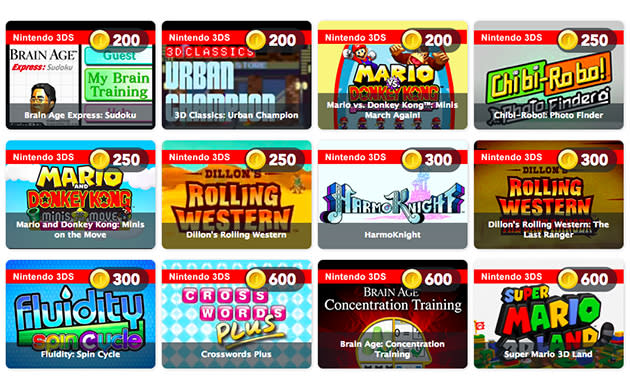 So Club Nintendo is closing down in just a few months, and you've got a huge stockpile of Coins. What's a gamer to do? Well, Nintendo is helping members of its soon-to-be-dead loyalty program spend their accrued currency by adding 117 Wii U, 3DS and Wii titles to the rewards catalog. Pricing varies drastically between games, starting at 150 Coins for Super Mario Land and other 3DS virtual console titles and ranging all the way up to 850 Coins for Wii Party U. There are some seriously great games to be had in the promotion, which runs through June 30th. You can browse all the titles on offer over at Club Nintendo.

In this article: 3ds, club nintendo, coins, just get kid icarus how is this even a decision, nintendo, wii, wii u
All products recommended by Engadget are selected by our editorial team, independent of our parent company. Some of our stories include affiliate links. If you buy something through one of these links, we may earn an affiliate commission.