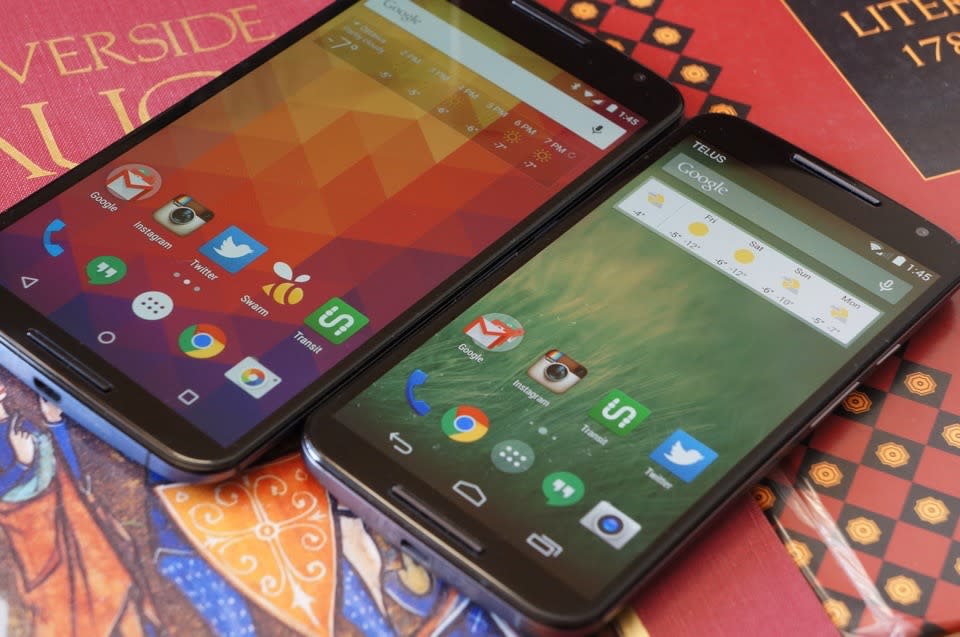 Moto X or Nexus 6? It's a question that has bugged many fans of "pure" Android (including myself) for a few months, and it's not hard to see why. Although both Motorola smartphones are sleekly designed and pack some clever software tricks, they couldn't be more different in some areas. The Moto X is a mid-size, mid-priced device with the "good enough" hardware to match, but it's wonderful to hold and touts features even its bigger sibling lacks. The Nexus 6, meanwhile, is an all-out flagship for those who refuse to compromise on specs or software updates, even if it means carrying a massive beast of a handset. So which one deserves a place in your pocket? I spent a few weeks with each to find out, and the answer might surprise you. In a few ways, they draw even. Both have enough battery life (if not much more than that) to get me through a day of frequent Instagram and Twitter use, with a dash of Spotify streaming thrown in -- a slightly impressive feat for the Nexus 6, since previous Google-blessed phones tended to peter out quickly when subjected to my habits. The audio quality is top notch, too, whether you're making a phone call or watching a movie. And in terms of real-world performance, they're neck-and-neck. The Nexus 6 is technically quicker, but not so much so that you'll notice when running games or other intensive apps.

Still, I couldn't help but find myself leaning toward the Nexus 6. The larger, sharper Quad HD screen is impressive. As you might imagine, it's a great device for catching up on YouTube clips. And while the camera won't blow away the high-quality imagers on Samsung's Galaxy Note 4 or Sony's Xperia Z3, this is still the first Nexus I've seen that takes genuinely good photos in most situations, including at night if you use the high dynamic range mode. The Moto X's camera is often adequate, but it falls noticeably short in darker situations thanks to poor focusing and lots of noise. I'd add that Canadians have an extra incentive to snag the Nexus if they crave higher data speeds: Both the Nexus on Rogers and the Moto X on Telus were quick in my travels around Ottawa, at about 60Mbps downstream, but the Nexus supports Rogers' faster LTE-Advanced network in those precious few places where it's available.

However, I'd really point to the software as the main reason to pick up the Nexus. Its take on Android 5.0 Lollipop was more practical to me than the Moto X's custom software, even after the Moto X got Lollipop late into my trial run. The Nexus' lock screen notifications (which appear in Ambient Display mode when you lift the phone up) are easier to check than the X's Moto Display, which requires a finger press to see more than some icons. You can change that if your Moto X runs Lollipop, but that's still a minor hassle -- and the larger screen is arguably better suited to Ambient Display in the first place. Moreover, "OK Google" voice commands on the Nexus are much more responsive than their Moto X equivalents. I could ask the Nexus to perform a task and usually get things going right away, but there was a several second delay with the X. It probably won't surprise you to hear that Google's official phone is your best choice if you insist on timely upgrades. I got a firmware update to the Nexus within a couple of days of the patch being announced, for instance, but there's no guarantee of that happening with the Moto X. The unlocked Pure Edition got Lollipop relatively quickly, but it took two months for my carrier-bound version to see the new operating system. While quick OS releases don't matter as much as they used to thanks to Google Play Services and core app updates, it's still nice to get core interface improvements as soon as possible.

This isn't to say the Moto X is a bad phone -- far from it. Outside of the camera and that voice recognition lag, it's superb. I like waving my hand to trigger Moto Display, or twisting my wrist to launch the camera. There's no denying that the Moto X is much easier to use one-handed, for that matter. I'm thankful I could pair a Moto 360 with the Nexus, because that behemoth is too unwieldy for those moments when I'm holding on to a bus pole or carrying shopping bags. Likewise, I'll admit to being slightly jealous of Moto X buyers who can use Moto Maker to customize their device. If you want a cognac leather back, a white front and purple trim, you can make it happen.

But here's the thing: The Nexus 6 isn't so unwieldy that I wanted to give it up, and its advantages are too meaningful to ignore. It's simply more useful for those times when you need to check for important email without unlocking your phone, or want to take a snapshot of your friends at a dimly lit bar. Although the Nexus isn't as much of a bargain as the Moto X, I'd say it's worth the added expense.

In this article: android, engadgetirl, google, irl, lenovo, mobilepostcross, motorola, motox, nexus6, smartphone
All products recommended by Engadget are selected by our editorial team, independent of our parent company. Some of our stories include affiliate links. If you buy something through one of these links, we may earn an affiliate commission.