Actroid-F: the angel of death robot coming to a hospital near you (video)

Actroids go on sale in Japan, John Isidore not impressed 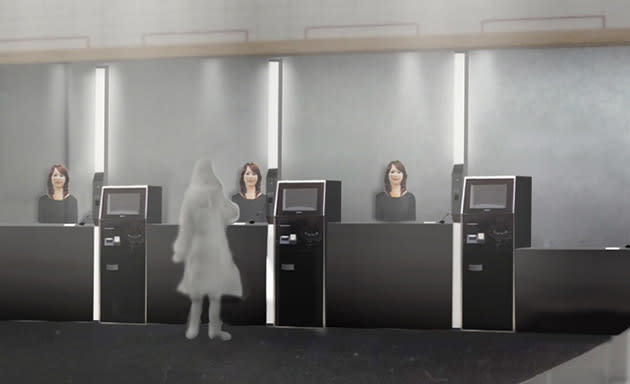 Going to Japan? Here's a bit of advice: if you're absolutely terrified of eerie human-like robots, think very hard before visiting Nagasaki prefecture's Henn-na Hotel that's slated to open its doors in July. Why? Because the high-tech hotel will employ 10 robots, three of which are multilingual gynoids that look like they were shipped straight from Uncanny Valley. Kokoro, the robots' manufacturer, calls them "actroids," and yes, you've seen us feature them in the past. Thankfully, they're stuck behind the check-in counter as receptionists, so you can just get that part done as fast as possible. Or, you can try to flirt for a room upgrade if that's your thing, since they can apparently establish eye contact and respond to body language. Once you're done checking in, an industrial robot similar to the one found in Yotel New York will stash your luggage. The remaining robots in the staff list, on the other hand, will take care of your other needs, such as making your coffee, cleaning your room or delivering your laundry, among many other tasks. Other than the robots themselves, the hotel's high-tech features include the use of facial recognition tech to open guest rooms, a system that detects body heat to auto-adjust room temperatures and the use of tablets to call for room service. Henn-na (Henn means "strange" or "change;" feel free to pick a translation) will also use solar power and implement energy-saving methods to keep costs and room rates low.

This hotel, by the way, is located within Huis Ten Bosch, a Nagasaki theme park made to look like The Netherlands. It's a two-story structure with only 72 rooms, that's why you'll have to bid for the right to stay during peak periods. The good news is that bids are capped, so the rates really aren't that bad, especially for Japan: single occupancy rooms begin at $60 per night, while the highest possible price for a triple room is $153. In 2016, 72 more rooms will be available once the second phase of construction is done, and they'll most likely be launched with even more robotic employees.

Those who prefer to interact with human hotel staff will be glad to know Henn-na will open with 10 employees made of flesh and blood. Its developers are hoping that machines can run 90 percent of the hotel's operations in the future, though. They also want to build 1,000 similar hotels worldwide, hopefully after we've already found a way to make sure AIs never ever turn into Skynet.

[Image credit: Henn-na Hotel]
In this article: actroid, hotel, hotels, Japan
All products recommended by Engadget are selected by our editorial team, independent of our parent company. Some of our stories include affiliate links. If you buy something through one of these links, we may earn an affiliate commission.