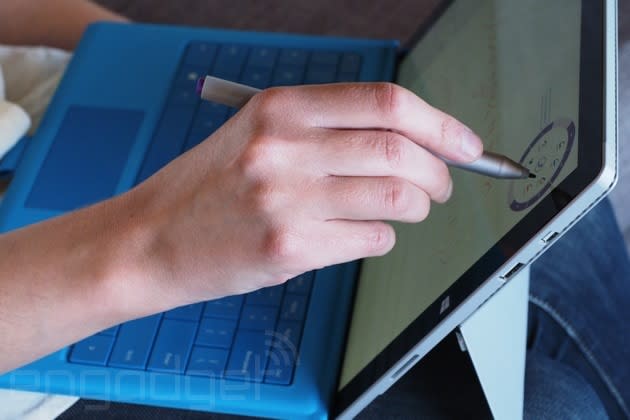 Microsoft now owns N-trig, maker of the all-important pen included with Microsoft's Surface Pro 3, according to Israeli financial news site Calcalist (translation by Reuters). The deal is estimated at $200 million, and most of N-trig's 190 employees will transition to Microsoft Israel as part of a new research and development center, the site says.

When Microsoft revealed the Surface Pro 3 in 2014, it stressed that the integrated digitizer was "not a stylus," but rather a digital interpretation of an ink-based pen. In our review, we noted that compared with Wacom's digitizer technology, N-trig's pen was "more natural to hold" and felt "more like dragging a pen across a pad of paper." Many Engadget readers shared the sentiment, though some felt that the screen's pressure sensitivity ruined any attempt at a truly pen-like experience. Maybe that's something N-trig can work on at Microsoft.

N-trig also makes pressure-sensitive pens for companies besides Microsoft, and the report doesn't address whether this part of its business will continue. When we reached out, Microsoft offered no comment on the report (even though we'd accept a hand-written digital letter as a response).

In this article: digitizer, Microsoft, microsoftsurfacepro3, n-trig, ntrig, stylus, surfacepro3
All products recommended by Engadget are selected by our editorial team, independent of our parent company. Some of our stories include affiliate links. If you buy something through one of these links, we may earn an affiliate commission.