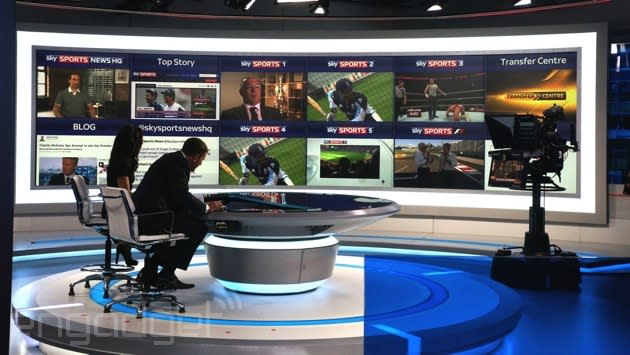 Earlier this week, the Premier League announced the winners of its latest TV rights auction. As expected, Sky and BT were the (only) big winners, paying a whopping £5.14 billion for coverage over the next three seasons. The following morning, Sky's shares took a hit, with investors seemingly unhappy at the fact the company paid almost £4.2 billion for 126 live games, 70 percent more than the previous auction. In comparison, BT paid £960 million, an increase of just 18 percent.

Is Sky fazed? Judging by Group Director Graham McWilliam's response, not at all. In a Tweetstorm posted earlier today, McWilliam cleared up why Sky is happy with the outcome of the auction, while taking the chance to publicly blast the company's broadcasting rival.

In the space of seven tweets, McWilliam acknowledged Sky "went in hard," adding that it "paid big" because "that's what it takes." He accused BT, which secured the Saturday evening slot and a handful of midweek evening kickoffs, of twice failing to "muscle in" on Premier League rights, leaving Sky Sports "miles ahead for years to come."

Sky has reasons to be cheerful. It secured five of the seven packages on offer, grabbing the first ever round of Friday night matches and also recouping Saturday lunchtime kickoffs. It retains "Super" Sunday afternoon matches while commanding 75 percent of the 1st and 2nd pick of matches to show live.

However, it's not all doom and gloom for BT. With the £12.5 billion takeover of EE weighing heavy on its balance sheet, the company's Premier League costs didn't balloon as much as its rival. For £960 million, it acquired four more matches than its current allocation of 38. They'll be added to its live Champions League coverage next season, after BT wrestled European rights from its chief competitor in 2013.

Commenting on the Champions League, McWilliam tweeted that it was the "right decision for us not to chase Champions League. £300 million only guarantees 26 matches with British teams. #premierleague matters more to fans."

With so much money on the table, customers could find themselves footing the cost of this week's auction. Sky has already said it may increase pricing in the future and BT is in a position where it may need to begin charging BT Broadband subscribers (who currently get it free) to recoup some of its investment. Don't expect anything to change in the short term, but things could change when the 2016-17 Premier League season gets underway.

In this article: auction, bt, football, premier league, sky, soccer, uk-feature
All products recommended by Engadget are selected by our editorial team, independent of our parent company. Some of our stories include affiliate links. If you buy something through one of these links, we may earn an affiliate commission.