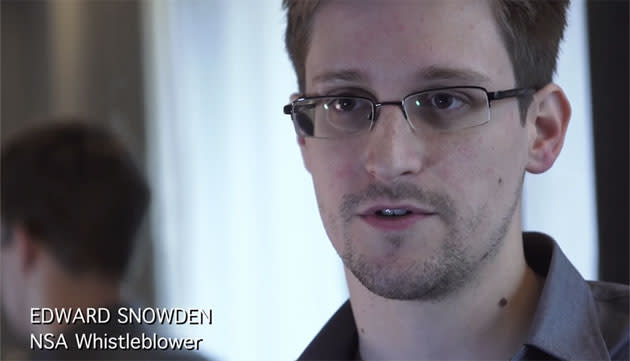 A documentary that outlined how Edward Snowden revealed the NSA's data surveillance program to the world has just won an Oscar. Citizenfour director Laura Poitras has a track record of serious documentaries, including My Country, My Country and The Oath, but the PRISM documentary marks her first Oscar win. Following the award, host Neil Patrick-Harris made a quick lil' treason joke at Snowden's expense, possibly missing the gravitas of a story that dominated the news agenda for over a year. In response to the award, Snowden said: "My hope is that this award will encourage more people to see the film and be inspired by its message that ordinary citizens, working together, can change the world." We've added the full statement after the fold. (Can you guess who 'Citizenfour' actually was in the end? Hint: It's not Patrick-Harris)

"When Laura Poitras asked me if she could film our encounters, I was extremely reluctant. I'm grateful that I allowed her to persuade me. The result is a brave and brilliant film that deserves the honor and recognition it has received. My hope is that this award will encourage more people to see the film and be inspired by its message that ordinary citizens, working together, can change the world." - Edward Snowden

In this article: citizenfour, documentary, edwardsnowden, laurapoitras, nsa, oscar, oscars, oscars2015, prism, video
All products recommended by Engadget are selected by our editorial team, independent of our parent company. Some of our stories include affiliate links. If you buy something through one of these links, we may earn an affiliate commission.