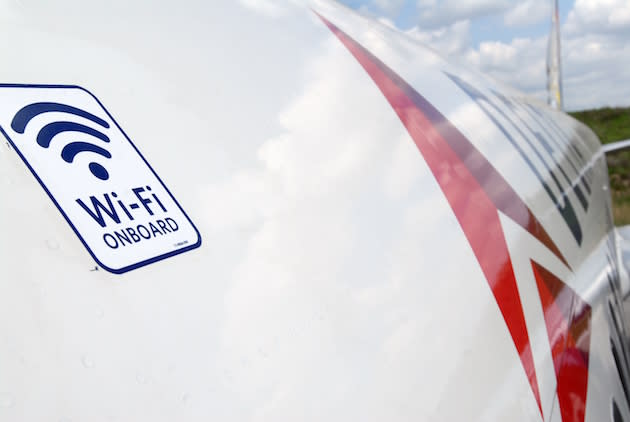 If you've flown Delta recently (or most domestic airlines) and tried to use the onboard Gogo WiFi, you know that it's often a crapshoot. A combination of where you're flying over and the number of passengers attempting to use it leads to either a decent connection (yay!), one that's slow as a snail (ugh), or none at all ($#!%). Look, we need to remember that sending tweets at 35,000 feet is basically magic. But being able to stream even a low-res YouTube clip would really make flying a happier experience.

The airline will upgrade over 250 of its workhorse aircraft (think 737s and 757s) with Gogo's satellite-based 2Ku technology (which was approved last month by the FCC) starting early next year. 2Ku replaces older air-to-ground connectivity (or "ATG"), where antennae on the bottom of the aircraft try to connect to cell towers on the ground, barely eeking out a few measly Mbps down. 2Ku, on the other hand, sits on the top of the aircraft and connects satellites orbiting the Earth that deliver a top speed of 70 Mbps down. In the meantime, Delta has already started rolling out 30 Mbps down Ku-based systems that should cover 85 percent of the airline's international fleet by year's end.

In this article: 2Ku, ATG4, aviation, delta, delta air lines, gogo, inflight, internet, Ka-Band, TL18TAIRFI, transportation, wifi
All products recommended by Engadget are selected by our editorial team, independent of our parent company. Some of our stories include affiliate links. If you buy something through one of these links, we may earn an affiliate commission.