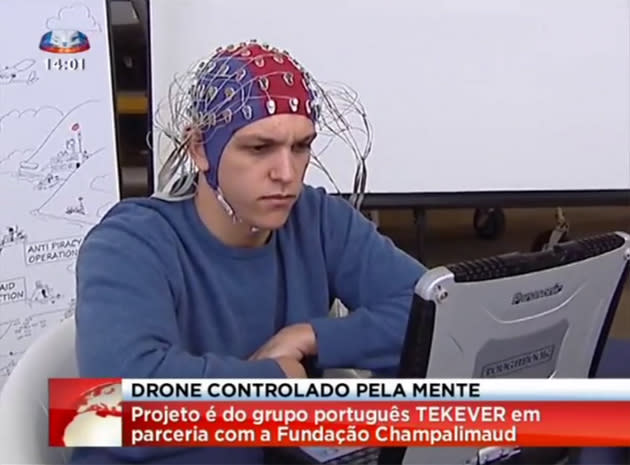 There have been tentative steps into thought-controlled drones in the past, but Tekever and a team of European researchers just kicked things up a notch. They've successfully tested Brainflight, a project that uses your mental activity (detected through a cap) to pilot an unmanned aircraft. You have to learn how to fly on your own, but it doesn't take long before you're merely thinking about where you want to go. And don't worry about crashing because of distractions or mental trauma, like seizures -- there are "algorithms" to prevent the worst from happening.

You probably won't be using Brainflight to fly anything larger than a small drone, at least not in the near future. There's no regulatory framework that would cover mind-controlled aircraft, after all. Tekever is hopeful that its technology will change how we approach transportation, though. It sees brain power reducing complex activities like flying or driving to something you can do instinctively, like walking -- you'd have freedom to focus on higher-level tasks like navigation. The underlying technology would also let people with injuries and physical handicaps steer vehicles and their own prosthetic limbs. Don't be surprised if you eventually need little more than some headgear to take to the skies.

In this article: brain, braincontrol, brainflight, champalimaudfoundation, drone, eaglescience, flight, mind, mindcontrol, portugal, prosthetics, robot, TechnischeUniversitatMunchen, tekever, transportation, tum, uav
All products recommended by Engadget are selected by our editorial team, independent of our parent company. Some of our stories include affiliate links. If you buy something through one of these links, we may earn an affiliate commission.