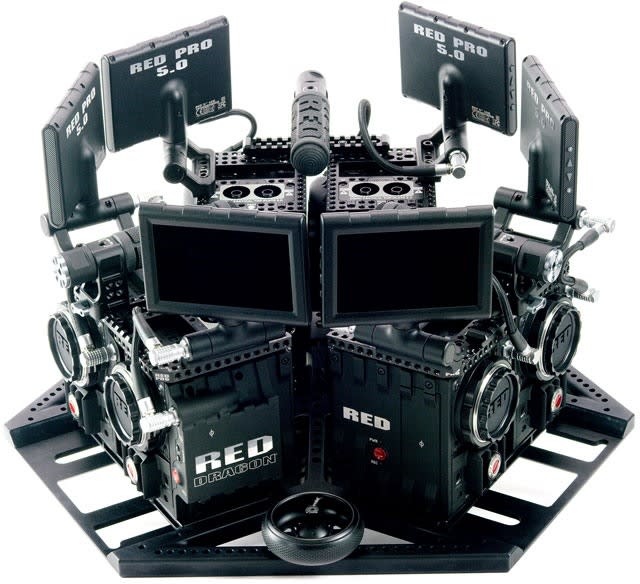 Ever since I experienced a live 3D virtual reality broadcast for the first time, I've been giving demos of the technology to anyone who will sit still long enough for me to put a Gear VR on their head. Across the board, the reactions have included at least two things: "This is amazing," and, "Can you move around like you're really there?" Now, NextVR says the answer to that question is yes, since it's adding "Light Field" (aka plenoptic) capture technology to existing rigs (like this 6K unit shown above) that will let viewers look around the scene with full six degrees of freedom. This is similar to the tech Lytro uses for its cameras that lets you change focus after a picture is taken -- and just got a $50 million investment to implement on VR. According to NextVR, its patented approach creates a 3D geometric model of the scene (shown after the break) ready for headsets like the Oculus Rift, Sony's Project Morpheus or even augmented reality units like Microsoft's HoloLens or Magic Leap's... whatever it is.

Company co-founder David Cole didn't mince words, calling it the "next step towards creating a holodeck," and combined with what we've seen over the last few years we're inclined to believe him. In the existing NextVR demos and live broadcast, they already include depth information used to create the 3D effect that really brought the "you are there" feeling, as shown in recent tests with the NBA and NHL.

Watching 3D sports broadcasts has always been a neat trick, but some of the restrictions of 3D killed the immersion. Sure when it's working correctly it looks great, but when you catch the edge of the display boom -- you're back in your living room. Wearing a VR headset ups the awkwardness factor, but has the added benefit of putting you actually in the scene you're watching, where you can look in every direction without losing the effect. Now, what NextVR is promising with Light Field means you could actually look around that ref standing in front of the camera, or get a better angle on a play happening across the court, just like if you were really there. Well, not like if you were really there, since at home you probably won't be paying $12 for terrible beer -- but you get the point.

In this article: AR, GDC2015, hdpostcross, Light Field, lightfield, NextVR, plenoptic, virtualreality, VR
All products recommended by Engadget are selected by our editorial team, independent of our parent company. Some of our stories include affiliate links. If you buy something through one of these links, we may earn an affiliate commission.