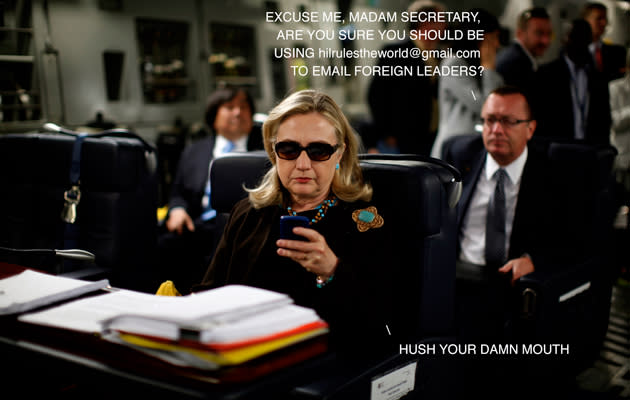 There are plenty of things that unite us as a species: our need to visit the bathroom, our dislike of Bieber and our seething hatred of corporate e-mail systems. It's the third on that list that's landed Hillary Clinton in hot water since it appears that, in her four years at the state department, she avoided using official email altogether. The former Secretary of State is believed to have conducted all of her business via a personal email account, breaching federal requirements to maintain an automatic record of all communication.

In a report by the New York Times, officials can only use non-approved methods of contact when there's no alternative. This ruling is not only to maintain security, but also so that every message can be instantly archived by oversight committees, historians and, eventually, the media. Clinton isn't the only Secretary of State to fall foul of the regulation, however, since Colin Powell was also a fan of using his private email account. Clinton's replacement, John Kerry, is a bit more of a company man, and is the first secretary to "primarily" rely upon his state.gov email account.

.@marieharf: "Secretary Kerry is the first Secretary of State to rely primarily on a http://t.co/thdDW21BSe email account."

Of course, Clinton probably wasn't dashing off too many Emoji-filled missives to other world leaders via her Gmail. In fact, it's more likely than not that most of her work was actually done over the ultra-secure (and top secret) JWICS system. That point is being supported by former Department of Defense official Adam Blickstein, who tweeted in support of the former official.

.@ExumAM Exactly. Really sloppy reporting. Most of her actual work would exist outside of UNCLASS networks. Easy pushback to stupid story

Clinton is expected to announce her intention to run for the Democratic presidential nomination, so her opponents are making a big stink about the revelation. Jeb Bush, a likely opponent in the 2016 election, tweeted that "transparency matters," although when he himself published his own e-mail records, he inadvertently revealed people's social security numbers and addresses. There was also criticism from the director of the national security archive, amongst others, who raised questions as to the security of this personal email account. Presumably she'll have to change her tune if she wins in 2016 or be stuck with a hand-me-down Obamaphone as punishment.

So http://t.co/qllv8fxzzJ is hosted email powered by MX Logic, presumably one of their secure email services? Anyone know that platform?

In this article: Email, Government, HillaryClinton, Politics, SecretaryOfState, StateDepartment
All products recommended by Engadget are selected by our editorial team, independent of our parent company. Some of our stories include affiliate links. If you buy something through one of these links, we may earn an affiliate commission.