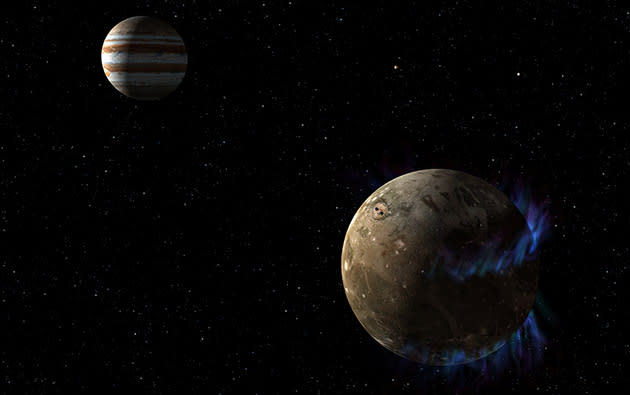 NASA has long suspected that Jupiter's biggest moon, Ganymede, has a subsurface ocean, but that's hard to prove when it's in the outer solar system. Now, a team of scientists has found a way to provide evidence that an ocean does exist underneath its ice crust using the Hubble telescope. How? Well, Ganymede is the only moon in our solar system that has its own magnetic field. That, in turn, is connected to Jupiter's field since the moon's so close to the planet. This connection causes aurorae (like the northern lights here on Earth) that circle the moon's northern and southern poles, which turned out to be just what the scientists needed.

They used the Hubble telescope to observe (under ultraviolet light) how big each aurora's movements are. You see, a saltwater ocean would create its own magnetic field that would counter Jupiter's, restricting the lights' movement and causing them to perform an unenthusiastic dance -- and that's exactly what's happening on Ganymede. The team believes that beneath the moon's 95-mile-thick ice crust, there's a 60-mile-deep saltwater ocean: that's 10 times deeper than our planet's.

NASA already has its eyes set on a number of icy moons: Titan, Europa and Enceladus. But since the presence of water is essential to its study of life beyond our planet, we wouldn't be surprised if the agency conjures up a mission to Ganymede in the future.

In this article: ganymede, hubble, HubbleSpaceTelescope, jupiter, moon
All products recommended by Engadget are selected by our editorial team, independent of our parent company. Some of our stories include affiliate links. If you buy something through one of these links, we may earn an affiliate commission.