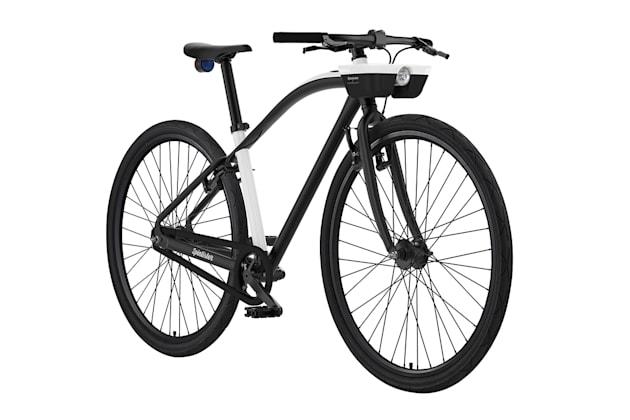 This smart bike is about to turn urban ridesharing on its ear. Spinlister, a global peer-to-peer bike sharing program, announced plans at SXSW on Friday to sell these specially-built VanMoof smart bikes for use as franchised rentals through its mobile app. It's like Uber or Lyft but, you know, with pedals.

Spinlister already allows its users to rent out their own personal bikes, skis, surfboards, and snowboards through the company's iOS and Android apps. Friday's announcement expands on that concept in that instead of having its users offer up their own personal, bikes, skis, surfboards and snowboards (as they do right now on the Spinlister app), the company will sell folks a VanMoof smart bike. Users will then be able rent the bike for profit with Spinlister taking a 17.5 percent cut of the revenue. It's essentially the same model as a taxi franchise wherein the cabbie owns his vehicle but still gives the cab company a cut of each fare for the benefit of operating under their corporate awning.

Unlike New York's CitiBike or California's Bay Area Bike Share programs, which are so hampered by exorbitant infrastructure costs and operational overhead that they require government or corporate sponsorship, these Spinlister bikes don't need the centralized "hub and rack" system that the sponsored programs rely on. Thanks to theft-deterrence measures like an integrated Bluetooth lock and onboard GPS tracker, these bikes can be picked up and left anywhere within city limits -- users simply reserve the bike as they would a Zipcar.

And just like a Zipcar, it will be the renter's responsibility to return the bike in good condition. As the company's Lister's FAQ clearly states, "All renters sign our Rental Agreement, which makes them liable for any damage or personal injuries while renting the ride. For example, if your bike gets a flat tire during the rental it is the renter's responsibility to repair the bike before giving it back to you." So, no, once you're done using the bike, you can't just leave it unlocked on a street corner unless you want to be liable for the full cost of the bike. What's more, these smart bikes will carry up to $10,000 insurance to guard the owner against any accidents, injuries, property damage, theft or general mayhem caused by scofflaw renters who refuse to pay up.

"This new decentralized bike-share model will take the traditional system of a central hub or station, and turn it on its head. From a renter's perspective, they can simply use the Spinlister app to locate a bike, book it, unlock it and ride away," Spinlister CMO Andrew Batey, said in a statement. "From an owner's perspective, they're able to conveniently make money, help people, and participate in the world's first sustainable bike share model. This model requires no sponsorship from private companies or allocation of tax resources from governments into a model known to be flawed."

Spinlister plans to roll out this new service later this summer in Portland, OR. There's no word yet on what the bikes will cost, but the Spinlister website assures potential owners that it "has plans to subsidize and finance the bicycles to allow users to pay the bicycles back through rental revenue over time." That sounds like a win-win for everybody involved.

In this article: bicycle, portland, ride sharing, spinlister, sxsw2015, VanMoof
All products recommended by Engadget are selected by our editorial team, independent of our parent company. Some of our stories include affiliate links. If you buy something through one of these links, we may earn an affiliate commission.