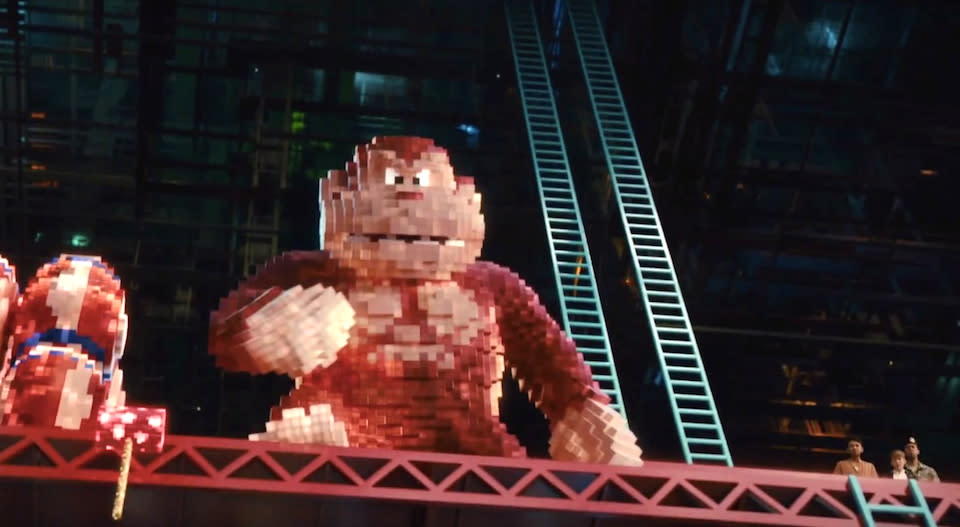 Pixels is a live-action movie about an alien-controlled cadre of classic video game characters wreaking havoc upon humanity by turning everything they touch into, well, pixels. It's based on the charming 2010 short by the same name that Sony thought would make a great feature-length movie starring Happy Gilmore (Adam Sandler) and Paul Blart (Kevin James). A mulleted Peter Dinklage is along for the ride too, in what looks like a less challenging role than his voice work in Destiny was. His character bears more than a passing resemblance to Dog the Bounty Hunter, because sure why not? At one point, Pac-Man's creator Toru Iwatani (played by Denis Akiyama) gets his hand chomped off by the big yellow guy himself. And just when I thought it couldn't get any more stupid, out came trite "homages" to iconic scenes from Close Encounters of the Third Kind and Independence Day. All this to say: The movie looks absolutely abhorrent.

Historically, video games and movies haven't gotten along too well. There are a few shining examples of the gears aligning perfectly (I'm looking at you, Crank), but it's rare. Notice that the example cited isn't actually based on a video game property.

Pixels looks more along the lines of 2005's Doom (starring Dwayne "The Rock" Johnson), or any number of Uwe Boll's crummy adaptations, than cult classics like The Wizard or Mortal Kombat. Granted, this is just a trailer. The final flick could actually be really good! But considering the people involved, I'm not tempted to give it the benefit of the doubt.

For starters, Pixels is helmed by Chris Columbus, a director who hasn't done anything worth mentioning since the first two Harry Potter flicks over a dozen years ago. The talent on the other side of the camera doesn't inspire much confidence either: Nine of the last 10 films that Adam Sandler's been involved with (either starring in or working on the production side of) sit below 40 percent on movie review aggregator Rotten Tomatoes. Two are in the single digits and one is at 0 percent. The latter means that of the 35 critics who saw the flick, none gave it a positive review. Kevin James' filmography doesn't fare much better.

It doesn't matter that Pixels will probably flop critically -- box office receipts speak much louder than scathing reviews and thus perpetuate the cycle.

So why is this movie even happening? The likely answer is simple: money. Regardless of how horrible the James and Sandler vehicles Grown Ups and its sequel were, combined they inexplicably pulled in just under $300 million in domestic ticket sales according to Box Office Mojo.

Sadly, those aren't the only examples. Columbia Pictures almost assuredly knows that the duo have built-in audiences that'll see anything they're in. Couple that with a generation's easily exploitable nostalgia for retro video games and you have what's known as "A Safe Bet." It doesn't matter that Pixels will probably flop critically -- box office receipts will speak much louder than scathing reviews and thus perpetuate the cycle.

It doesn't have to be this way, of course. If enough people sit at home for a weekend instead of putting butts in seats to see what'll almost assuredly be a heaping pile of cinematic garbage, Hollywood just might notice and stop giving tripe like this the green light. Should you need a solid video-game-related movie to watch this summer, might I suggest Wreck-It Ralph or Scott Pilgrim vs. the World on Blu-ray instead?

In this article: AdamSandler, ColumbiaPictures, DonkeyKong, gaming, hd, hdpostcross, KevinJames, movies, pac-man, PeterDinklage, pixels, pixelsmovie, sony, SonyPictures, ToruIwatani, video
All products recommended by Engadget are selected by our editorial team, independent of our parent company. Some of our stories include affiliate links. If you buy something through one of these links, we may earn an affiliate commission.