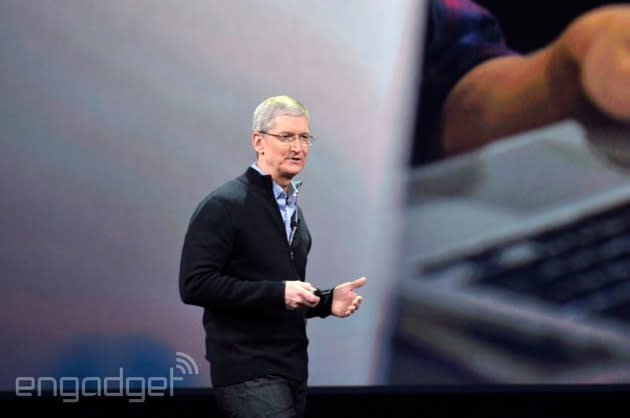 Are you getting the sense that Apple is becoming the new Microsoft, the giant corporation that's simultaneously doing too much and refusing to take risks? Not surprisingly, Tim Cook would like to have a word with you. He tells Fast Company that he doesn't accept those comparisons because Apple is "willing to lose sight of the shore" and drop existing technology, like optical drives and the 30-pin connector, in the name of progress. To Cook, Microsoft's problem (until lately, at least) was its refusal to "walk away from legacy stuff" -- it was so determined to support the old way of doing things that it had trouble moving forward.

There's at least some truth to the argument. One of the big factors behind the declining PC market has been the lack of corporate upgrades. Companies have been so attached to old Windows releases (usually to support ancient apps) that they've been afraid to update. However, the big concern is that Apple hasn't had many daring products in recent years. Microsoft, meanwhile, is trying out-there concepts like holographic computing; these experiments may not pan out, but they're at least exciting.

Not that Cook is dwelling solely on what the folks in Redmond are doing. For one thing, he believes that the Apple Watch will be the first smartwatch "that matters." While it may not be the first in its category (just as the iPhone wasn't the first smartphone), it'll supposedly be the device that finally explains why you want a tiny computer on your wrist. And when it comes to Apple's problems, including buggy software releases and cloud services that don't work as you'd hope? These are simply a reflection of the company being "human sometimes," Cook says. Things are getting more complex, but the CEO contends that Apple's highly integrated business model (where it controls both the hardware and software) is fine. If something goes wrong, it's in the execution. It's hard to say if that's really true (Google has long done a better job in the cloud), but Apple's soaring revenues suggest that Cook has little incentive to change his tune.

In this article: apple, applewatch, microsoft, smartwatch, timcook, wearable
All products recommended by Engadget are selected by our editorial team, independent of our parent company. Some of our stories include affiliate links. If you buy something through one of these links, we may earn an affiliate commission.