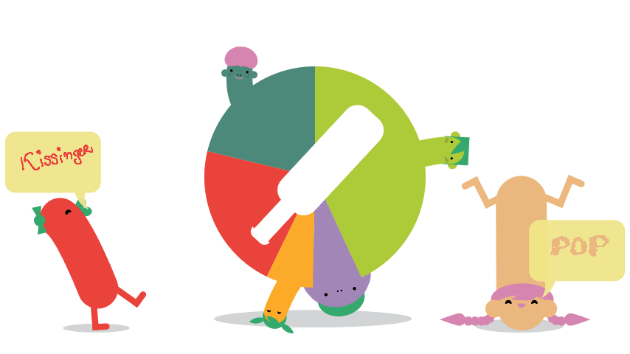 Ten years ago, multiplayer-only games went through a severe identity crisis. More people than ever were gaming together, but they were increasingly playing online only. The small-stakes joy of twitchy experiences like Street Fighter II and Super Off Road, games meant to be played in short sessions preferably in the same room, weren't feasible anymore. Video games have always been expensive to make, so multiplayer modes had to either come packaged with other content -- consider Halo's famed multiplayer tucked alongside its single-player story -- to flesh them out or be custom built to serve hardcore players meeting up on the internet, a la Team Fortress 2, Valve's modern-day equivalent to the easy-access multiplayer of yore. With both game making and publishing getting easier, cheaper, and more accessible for even the smallest developer, though, arcade-style multiplayer games have made a massive comeback. Making them is no easy feat, though! Engadget picked the brains of nine small developers responsible for some of the brightest, most unusual multiplayer video games out right now and asked about the biggest challenges in making games for more than one person to play. Starwhal is a four-player game wherein everyone controls a neon-colored, flying space narwhal and tries to stab each other. It is precisely as insane as it sounds. What's the hardest part of making space narwhal combat approachable? "Getting the right flow so players can easily pick up a controller, ready up and understand how to have fun very quickly," according to programmer Jason Nuyens. Having a flying whale with a sword for a face certainly helps. Gloriously uniting minimalist art with a staple of every co-ed seventh-grade party ever, Spin the Bottle: Bumpie's Party is one of the best multiplayer games on Nintendo's Wii U. "The most difficult thing is to convey the 'spirit' of the game to the players," explains Lau Korsgaard of KnapNok. "The type of multiplayer games we make require a certain mindset or attitude towards the other players. If the players don't get it, it falls completely flat." Spin the Bottle nails it through its funny, weird presentation. It forces physical closeness, but never makes it awkward. "The most difficult thing about making an indie multiplayer game is actually getting a solid community of players established, and making sure it keeps on growing," says Robin Meijer of Ronimo Games. Awesomenauts, the studio's successful cartoony shooter, has built that audience by spreading to numerous devices and constantly evolving over three years. Constant tweaking and updating is the way to keep old players playing and bring new people in. Die Gute Fabrik's Sportsfriends -- and especially Douglas Wilson's Johann Sebastian Joust in that anthology of multiplayer games -- does remarkable things with ridiculous motion controllers like the bulbous PS Move. There aren't even any graphics on a screen. The whole goal in Johann is to physically jostle another player's controller. According to Wilson, this sort of unconventional thinking is essential to multiplayer design: "One major challenge to making a local multiplayer game is putting yourself in a sufficiently social context. If you work at home by yourself, for example, you won't have friends/colleagues/collaborators with whom to play the game, constantly. I think the best local multiplayer games capture a kind of humor and conviviality that you get hanging around with friends and close colleagues." "I find a lot of what I love in making multiplayer games is socializing and getting friends in on the game-making process; it's unfortunate that a lot of the game-making process isn't conducive to having people around," says Beau Blyth, creator of the brutal, bananas Samurai Gunn. "It's not terribly interesting to watch." His game, on the other hand, is insanely fun to watch as players' teensy, pixelated warriors bounce off each other.

Being able to see how those people play in the real world is the key to finding what does and doesn't work in your game.

"As an independent developer, you usually aren't fortunate enough to have a bunch of people with enough patience to hang around you all day while you tweak various aspects of your game, so it can be difficult to design and test around moments you only witness with many players." Nidhogg is the only game around that forces two people to fence in dilapidated, low-fi arenas. It's also the only game where, after you get your Princess Bride on, a monstrous worm devours you. Mark Essen's biggest challenge wasn't getting people to have fun, but getting them to improvise. "Getting players to try different things in a multiplayer game is tough because it's hard for competitive players to change up a winning strategy," says Essen. "In Nidhogg, we tried to make each move really vulnerable to a range of counters so that once an opponent's strategy was figured out, even a novice could offer some resistance." Imagine beach volleyball in the world of Blade Runner and then make the teams play with firearms rather than their hands. That's Necrosoft's Gunsport. The tricky part in making it is finding how to make the players and their guns different. "The toughest thing about making Gunsport is ensuring that asymmetric gameplay is fair," says Brandon Sheffield, director at Necrosoft. "That is to say, making sure the matchups allow for anyone to win across experience levels. I wanted each character on the team to have their own weapon, with different powers and properties. This, perhaps obviously, dramatically increases the number of matchups, and thus balancing issues. Pong is a great example of symmetrical gameplay -- you've got two paddles; they don't do anything different from each other, so you can easily manage the player experience, and nothing feels 'unfair.' Now that we've moved from symmetrical to asymmetric competition, there's a lot more to balance." Vlambeer stormed the gaming world with a string of beautiful, mad games for browsers and smartphones over the past five years. Super Crate Box and Ridiculous Fishing, the most absurd game about a lone fisherman flipping fish into the air, marked them as greats, but both games are about serving just one player. When it came to making Nuclear Throne, its multiplayer game about freaky mutants blasting each other in caves, Vlambeer had to change how it thought about fairness.

"When a single player messes up, it's easy to just kick them back to the main menu," explains Vlambeer's Rami Ismail. "But what do you do if only one player dies? And how do you make that feel 'fair'?" Seth Rosen of Klei Entertainment, creator of Don't Starve Together

Don't Starve has a marvelously addictive premise: You're alone in the woods -- now try not to die. Don't Starve Together loses the original's lonely ambience, but gains the hilarious thrill of trying not to die of exposure, insanity, or hunger with a crowd. Making that transition from single-player to multiplayer has been tricky. "The most difficult thing has been adapting a game designed and balanced for single-player to work with, and also be interesting and fun with, multiple players, regardless of whether there are two or 24 players," said Seth Rosen, designer with Klei Entertainment. "The small-group, cooperative-survival experience could not be more different from the massive server wander-around-the-wilderness-alone experience, but we're trying to nail both."