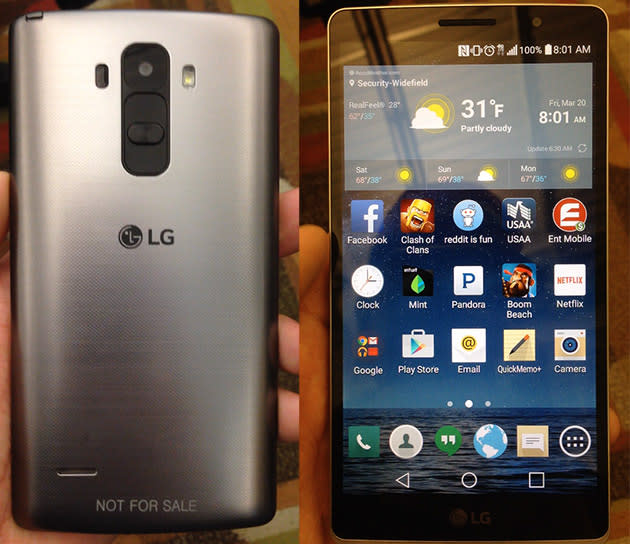 The phone in these images looks like the LG G3, but you might notice some subtle differences. That's because it could actually be pictures of the brand's yet-to-be-released flagship, the G4. An XDA Developer user called s3rv1cet3ch posted a folder of images on the forum, explicitly calling it the G4. The user also pointed out that it has stylus on the top left corner, but if this is the Korean version of the device, that could very well be a TV antenna. After all, G3's Korean version has an antenna you can pull out on that exact spot.

Unlike its predecessor's circular components, this device has a square camera sensor and a rectangular power button. The photos of its interface below also indicate that it's loaded with Android Lollipop out of the box. According to Yonhap News, the G4 is supposed to have a curved, 5-inch Quad HD display -- we can't really see any curve in these images, but it might be due to the phone's angle. Of course, this could be a different phone altogether.

Update: Some eagle-eyed folk have spotted "M8936" in the baseband version, which would suggest this phone holds a Snapdragon 610 -- not really what you'd expect in a flagship (where an 8-series would be more appropriate). Unless this was an early prototype with different innards? Or maybe this is just some sort of variant of the G3 Stylus. Either way, we won't know for sure until LG officially unveils the new flagship phone by the end of April. Update 2: The OP has shared another photo of this mysterious device, but this time with the stylus in its full glory. In this article: G4, lg, mobilepostcross
All products recommended by Engadget are selected by our editorial team, independent of our parent company. Some of our stories include affiliate links. If you buy something through one of these links, we may earn an affiliate commission.