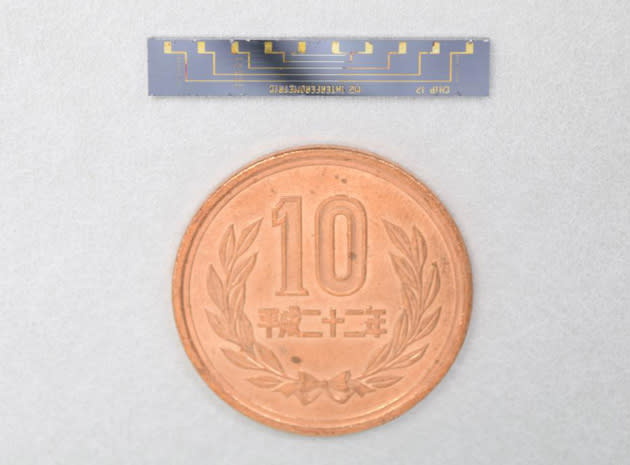 Until now, quantum teleportation (that is, sending quantum data from one place to another) has required a room-filling machine. That's not going to usher in a brave new era of quantum computing, is it? However, a team of British and Japanese researchers has shrunk things down to a much more reasonable size. They've stuffed the core optical circuits for quantum teleportation into a single silicon chip that's just slightly longer than a penny -- in contrast, an experimental device from 2013 was nearly 14 feet long. While scientists built the chip using "state-of-the-art nano-fabrication," it should be more practical to make than its ancestors, which took months.

This doesn't mean that a whole quantum data transmission system fits on a chip yet -- that's the next step. Even so, this is a big deal for quantum computing as a whole. It's no longer outlandish to imagine reasonably-sized quantum cryptography devices that give you airtight communications, and the technology you see here is ultimately vital to building true quantum computers. This chip may just be a stepping stone, but it's a big one.

In this article: chip, computing, ntt, photonics, quantumcomputing, quantumentanglement, quantumphysics, quantumteleportation, science, universityofbristol, UniversityOfSouthampton, universityoftokyo
All products recommended by Engadget are selected by our editorial team, independent of our parent company. Some of our stories include affiliate links. If you buy something through one of these links, we may earn an affiliate commission.