Musicians and Congress join forces in fight for royalty reform 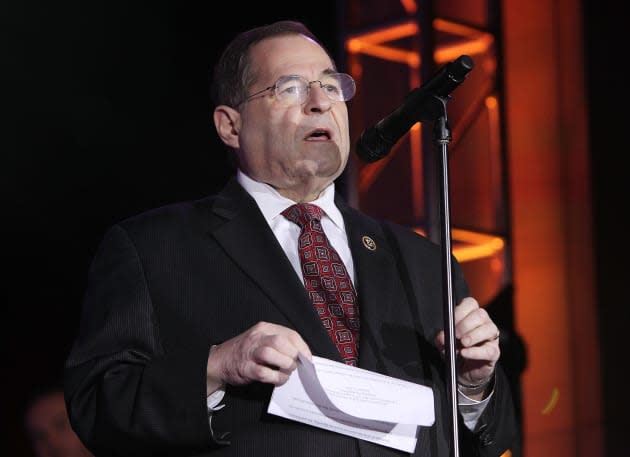 Fair artist compensation from internet radio and streaming services is quite the hot topic of late, and now members of Congress are joining the debate. Congressman Jerrold Nadler, D-NY, and Congresswoman Marsha Blackburn, R-TN, alongside the musicFIRST Coalition, introduced the Fair Play Fair Pay Act today that would end regulations that don't require terrestrial radio stations to pay royalties to artists and labels. As it stands, those AM/FM stations available in your car only pay licensing fees to songwriters and publishers. Organizations like ASCAP (American Society of Composers, Authors and Publishers) handle those agreements, collecting fees every time a copyrighted song is played on the radio or during a public performance. For its part in managing those agreements, ASCAP brought in over $1 billion last year.

"Artists, musicians, producers and radio services alike deserve better," Nadler explained. "The Fair Play Fair Pay Act fixes this broken and unjust system by making sure all radio services play by the same rules, and all artists are fairly compensated."

If you think that this will doom smaller local stations (like I did at first), the proposed measure requires stations that earn less than $1 million a year in revenue to pay $500 annually. For nonprofit public, college and other non-commercial broadcasters, the fee would be $100 per year -- religious and talk stations being exempt from any payments. Obviously, larger radio companies like iHeartMedia (858 stations in the US) would have to pay more. The bill also aims to nix the "below market rate" that satellite radio broadcasters currently pay, requiring it and traditional radio to shell out the same rates as internet radio services like Pandora and others.

"It's a question of basic economic fairness, but it is also a matter of fair competition between music services."

"It's a question of basic economic fairness, but it is also a matter of fair competition between music services," said musicFIRST Executive Director Ted Kalo. "Let the best services win -- fair and square, on the depth of their playlists and the quality of their products." Kalo's organization aims to make sure artists and creators are paid fairly for their work, no matter where it's played. Gloria Gaynor performs at the Grammy Awards after-party in February.

In addition to the leveling rates across platforms, the bill would also require digital services to pay royalties on music recorded before February 15th, 1972. If you've been streaming albums like Miles Davis' 1970 jazz masterpiece Bitches Brew via your go-to streaming service, not a penny of royalties has been paid to the artists or labels. The topic has already been debated in court as members of the '60s group The Turtles sued SiriusXM over payments, even though the band's catalog isn't copyright protected. As you might expect, older musicians, singers and songwriters are quite vocal about supporting the bill -- with names like Gloria Gaynor and Cyndi Lauper lending a hand.

In this article: artistcompensation, bill, copyright, copyrightlaw, internetradio, music, musictreaming, radio, royalties, satelliteradio, streaming
All products recommended by Engadget are selected by our editorial team, independent of our parent company. Some of our stories include affiliate links. If you buy something through one of these links, we may earn an affiliate commission.