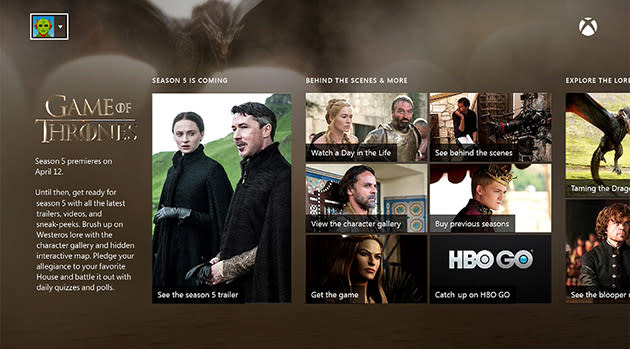 If you've resisted piracy's siren call, you now have another way to catch the season premiere of Game of Thrones. Xbox Live members with an Xbox One or 360 can now stream the Season 5 premiere gratis until April 16th, including extra content like trailers, on-set tours and blooper reels. The episode debuted on HBO -- available to many with cable or satellite thanks to a conveniently timed weekend preview event -- and its just-launched $15/month streaming HBO Now service, to largely solid reviews (spoilers at that link). It looks like the extra is only available in the US due to HBO's complex foreign syndication deals, but it's good news if you didn't want to sign up with HBO just for GoT.

In this article: features, GameofThrones, HBO, hdpostcross, microsoft, XboxLive
All products recommended by Engadget are selected by our editorial team, independent of our parent company. Some of our stories include affiliate links. If you buy something through one of these links, we may earn an affiliate commission.