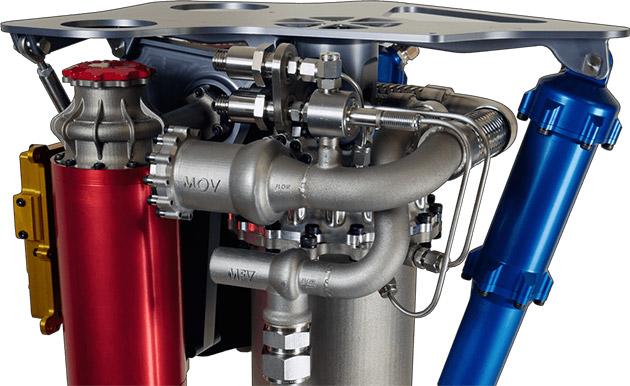 Rocket Lab is a Lockheed Martin-funded startup that dreams of taking small satellites to space for an affordable price -- but it wants to do so using technology quite different than usual. See, the company has revealed that its engine called the "Rutherford" is (1) composed mostly of 3D-printed parts, and (2) uses batteries instead of liquid fuel. It will be paired up with the company's Electron launch system, and together they make up the first battery-powered rocket, or so the startup claims. Its batteries power the turbopumps that deliver propellant to the engine.*

The company says it takes merely three days to print the components of the Rutherford engine out of titanium and other alloys, using an advanced form of 3D printing called "electron beam melting." (If those components are manufactured via traditional means, it will take up to a month instead.) That means Rocket Labs', well, rockets can be manufactured faster and will cost clients less money per launch. In fact, the startup believes it will cost only around $4.9 million to send the 65 feet x 3 feet system to space, carrying a payload that weighs up to 220 pounds. It plans to start ferrying satellites and other payloads out there in 2016.

Update: As many of you pointed out, the Rutherford-Electron rocket doesn't use electric propulsion and still uses liquid fuel like typical rockets. We apologize for the confusion. [Thanks, Nik and RiotingSpectre]

In this article: 3dPrinting, battery, design, electricrocket, electronrocket, gadgetry, gadgets, rocket, rutherfordengine, satellite, space, timeline163dprintbig
All products recommended by Engadget are selected by our editorial team, independent of our parent company. Some of our stories include affiliate links. If you buy something through one of these links, we may earn an affiliate commission.