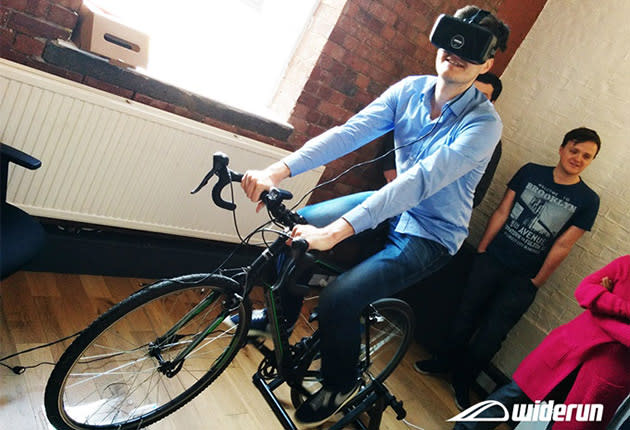 Some people need extra motivation to exercise, and the creators of this bike trainer called Widerun hope to provide that in the form of virtual reality. Widerun is a system comprised of a steering component and a base station that attaches to ordinary bikes. It works with both Oculus Rift and Samsung Gear VR -- just plug them in and strap them on to bike through virtual locations, from American cities to the Alps. While that sounds like a recipe for motion sickness, its Kickstarter page says its creators performed a series of tests and found that the system worked well enough to avoid triggering the condition.

They found that motion sickness is usually caused by a disconnect between what the rider feels and sees on screen. That's why the system tries to match as much of the virtual world as it can, with the steering component letting you take the bike wherever you want to within the simulation. The base station also adds resistance when you're going up slopes to mimic the difficulty of the biking up inclines. In case you're more susceptible to motion sickness than other people, though, you can use a TV, a computer or a smartphone as a screen instead of a VR headset.

Widerun's developers are currently trying to raise £30,000 ($44,540) via Kickstarter, where you can pledge a minimum of £250 ($371) to get a system of your own when it ships out in April 2016. But don't forget that the price doesn't include either VR headset (the Rift isn't even out for most people yet) or the bike itself. So the whole system will cost you much more $$$ than what you're pledging on the crowdfunding website.