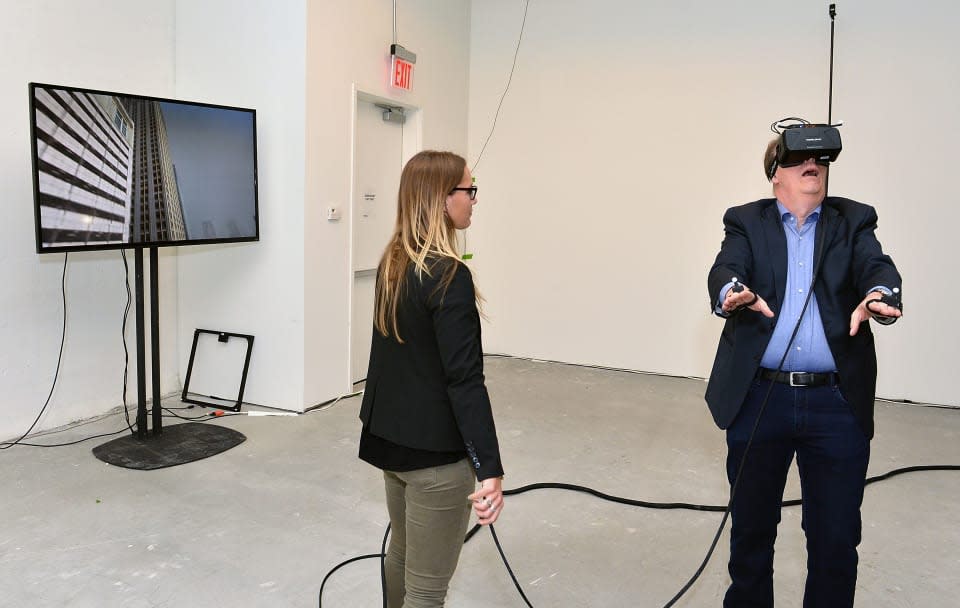 Last year, the Tribeca Film Festival began highlighting new mediums being used in storytelling, and that trend has translated over to 2015. Virtual reality is, naturally, a big part of this movement, as filmmakers start creating more content for consumer-grade devices like the Oculus Rift, Samsung Gear VR and Google Cardboard. This is why the current edition of the event is hosting Stanford's Virtual Human Virtual Interaction Lab, a venture started in 2003 by Jeremy Bailenson, who's a professor at the university and has been working on digital human representation since 1999. It features a set of VR experiences that attendees can check out, all with the same goal of transporting you into another reality.

Nowadays, that mission is simplified by the myriad companies investing in the space -- including Facebook with Oculus VR, Google, Samsung and, most recently, HTC and Valve. "We used to have a $40,000 headset that couldn't leave the lab, with thousands of wires on it," Bailenson says, emphasizing how much easier it is to use Oculus hardware as part of the workflow. The fact that he no longer has to rely on a stationary, ridiculously expensive headset is extremely valuable. If he did, bringing his latest work to the Tribeca Film Festival, roughly 3,000 miles away from home, simply wouldn't have been possible.

But here we are. So you can not only be the Stanford University quarterback in a training session, but also travel as a marine biologist to the bottom of the sea and even fly like a superhero. Or you can walk in someone else's shoes, which is slightly similar to The Machine to be Another experience, though not nearly as immersive. While these projects are fun and interesting in their current state, Bailenson believes he's just scratching the surface, noting that there's still the need for better technologies, such as improved tracking, to get the most out of VR. (For reference, a DK2 was powering the demos I saw at the Tribeca Film Festival.)

"In the last year, there's been more change [in virtual reality] than in the previous 18 years," he says. "What we want right now is to tell people about VR." Beyond that, Bailenson tells me there are many other projects in the works at the Stanford Virtual Human Interaction Lab -- which, by the way, happens to be funded by none other than tech titan Google.

In this article: hands-on, Stanford, Stanford University, StanfordUniversity, Tribeca Film Festival, TribecaFilmFestival, uk-feature, Virtual Reality, VirtualReality, VR
All products recommended by Engadget are selected by our editorial team, independent of our parent company. Some of our stories include affiliate links. If you buy something through one of these links, we may earn an affiliate commission.