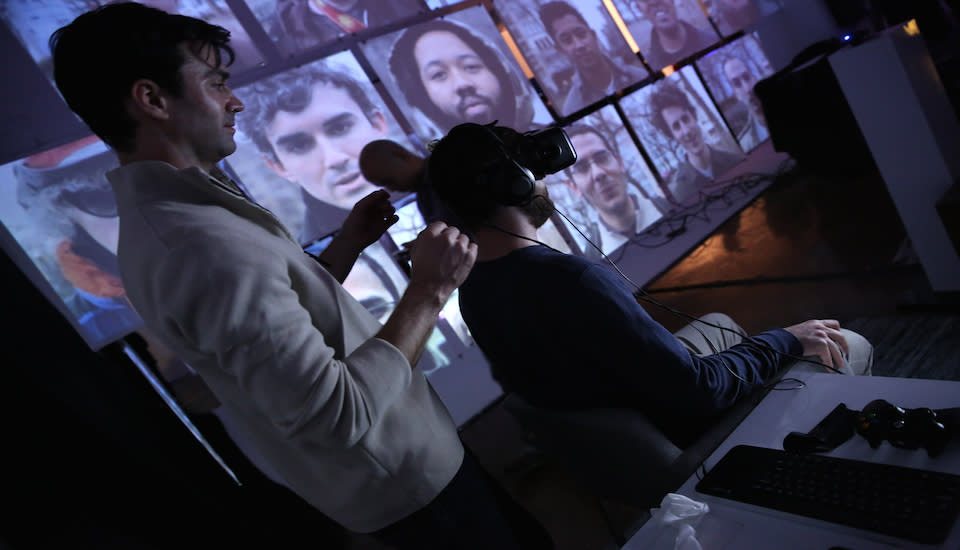 As has been the case since 2002, this year brought thousands of movie buffs to New York City for the Tribeca Film Festival. While at its core, the festival is still very much rooted in providing a platform for film creators to show off their latest productions, the event itself has grown to be about more than just films. This year, TFF introduced a few new technology-focused initiatives, in hopes of providing more options for both filmmakers and the media. That, coupled with panels, interactive events and, of course, the late-night parties, makes the festival one not to be missed. One of the novel things at the 2014 edition of the Tribeca Film Festival was Innovation Week, which included a series of events showcasing how cinematic narrative and technology can work together. Future of Film Talks offered panels with topics based on the way tech is affecting the industry, featuring participation from Aaron Sorkin, House of Cards creator Beau Willimon and The Wire's David Simon, to mention a few. Storyscapes, for its part, allowed attendees to experience five different interactive projects, including one that utilized an Oculus Rift headset to immerse viewers in a film. TFI Interactive Day, meanwhile, was a daylong event that exhibited a variety of different wonders, like blowing up a balloon via brain activity or using virtual reality to feel what it's like to take a walk outside the International Space Station. All of these events, plus others like Games for Change and Tribeca Hacks <Mobile>, were spread across The Big Apple and took place during the span of six days.

As TFF's Director of Programming Genna Terranova told me, the idea behind Innovation Week was to give attendees a way to explore the intersection between technology and storytelling. "Innovation Week enabled us to celebrate storytelling in the digital age in a new way, expanding opportunities to connect creators and innovators," she said. "We've developed a tradition of connecting the creative and tech communities, and the programming team and Festival goers have both become increasingly interested in the power of interactivity."

The 2014 Tribeca Film Festival had a total attendance of over 400,000, which should give you an idea of the sheer magnitude of the event. Among these were folks who weren't filmmakers or part of the media, but who simply wanted to watch a good independent film. Through a partnership with AT&T, dubbed Film for All, Tribeca actually opened its doors to all, allowing anyone to catch a free screening of one of 35 films that were included in the program. "April 25th enabled more New Yorkers and visitors to experience indie films; who may have otherwise felt that the Festival wasn't open for them," Terranova said to me about the one-day-only event.

But, as I said earlier, TFF had more than just film screenings on its menu.

A CONVERSATION WITH AARON SORKIN Aaron Sorkin (left) speaks during a panel at the 2014 Tribeca Film Festival.

More than apologizing, though, Sorkin stated that he's just now starting to learn how to write the show.

Quite a stir resulted from Sorkin "apologizing" for The Newsroom, his HBO drama about journalism, world events and the life of a fascinating news anchor. "I'm going to let you all stand in for everyone in the world, if you don't mind. I think you and I got off on the wrong foot with The Newsroom and I apologize and I'd like to start over," Sorkin said after being asked about what he's learned in doing the show. "I think that there's been a terrible misunderstanding. I did not set the show in the recent past in order to show the pros how it should have been done. That was, and remains, the furthest thing from my mind. I set the show in the recent past because I didn't want to make up fake news," said the writer during a Future of Film panel. "I wasn't trying to, and I'm not capable of, teaching a professional journalist a lesson. That wasn't my intent and it's never my intent to teach you a lesson or try to persuade you or anything."

More than apologizing, though, Sorkin stated that he's just now starting to learn how to write the show.

He also went on to discuss his upcoming film about Steve Jobs, which he says won't be a biopic. Sorkin let it be known that the film is written and shooting will begin this fall. And despite it being his seventh film, The Social Network and The West Wing creator said that he's never been as pleased with the final writing product.

"It is my first where I wrote what I set out to," stated Sorkin.

LAYING GROUND FOR THE FUTURE Robert De Niro uses an Oculus Rift headset as part of a Storyscapes project at the 2014 Tribeca Film Festival.

With conversations about technology involving Sorkin, Willimon, Bryan Cranston and many more A-list personalities, it's easy to see that the people behind the Tribeca Film Festival are keeping up with the digital trends. And by adding events like Innovation Week into the mix, the festival is simply trying to set itself up for the future and grow beyond its roots -- which, in the end, will make it better not just for avid indie-film watchers who attend every year, but also for the filmmakers that go through the submission process and subsequently bring their productions to New York City.

Terranova told me the response to all of this has been phenomenal, starting with the addition of Storyscapes in 2013 and other events from TFI Interactive, both of which are now part of Innovation Week. "We expanded this year in terms of space dedicated to the projects and accompanying programming elements for each, with concerts, live performances and conversations with creators," she said. "Each of these programs [is] so different, but all on a basic level attract storytellers interested in interactivity."

We shall see what next year brings.

In this article: exclusive, Innovation Week, interview, TFF, Tribeca, Tribeca Film Festival, Tribeca Film Festival 2014, TribecaFilmFestival
All products recommended by Engadget are selected by our editorial team, independent of our parent company. Some of our stories include affiliate links. If you buy something through one of these links, we may earn an affiliate commission.