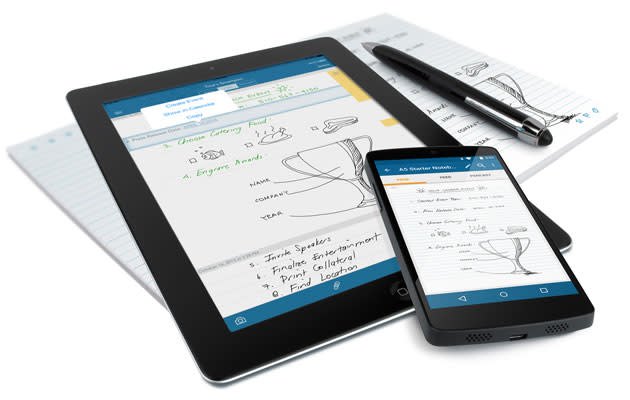 Making good on its promise back in January, the Livescribe 3 smartpen now works with Android devices. A preview version of the requisite app is now available for download, ready to equip devices running KitKat and newer versions of Google's mobile OS. In addition to the Livescribe+ Preview Edition app, you'll also need to install the Livescribe Link Preview Edition software, with the latter handling Bluetooth pairing duties so you don't have to swipe over to the setting menus every time. If you'll recall, using the high-tech pen with Livescribe's paper notebooks automatically digitizes your scribbles to the companion app on your trusty mobile device. Folks who are eager to employ the peripheral can grab the either the Livescribe 3 or Livescribe 3 Pro Edition at a $25 discount during this so-called preview period ($130 and $175, respectively). Unfortunately, you'll have to be in the US, Canada, Australia, New Zealand or the United Arab Emirates to take advantage, but a global launch is expected in the coming weeks. We're hoping the final software arrives then, too.

In this article: android, livescribe, livescribe3, mobilepostcross, pen, smartpen, software, stylus
All products recommended by Engadget are selected by our editorial team, independent of our parent company. Some of our stories include affiliate links. If you buy something through one of these links, we may earn an affiliate commission.