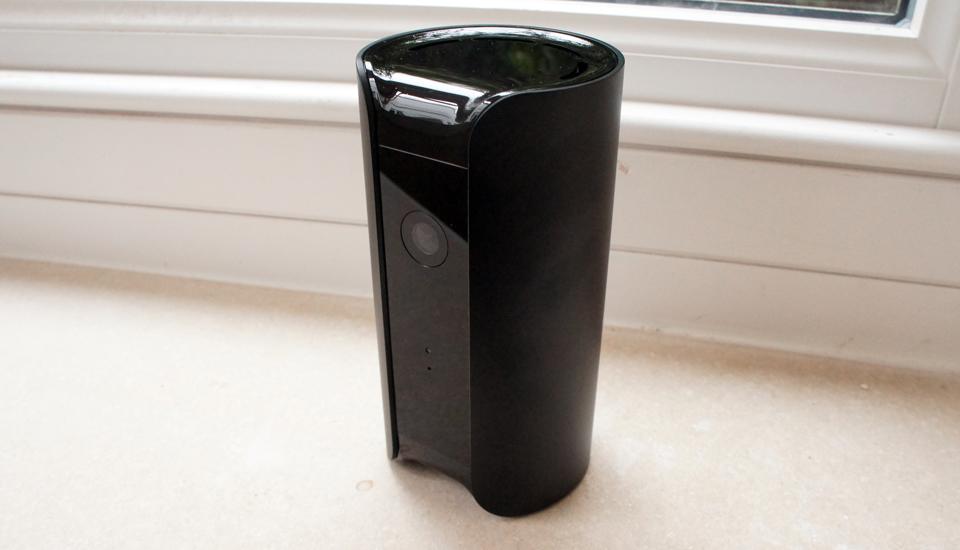 Canary is a 6-inch-tall black plastic cylinder that's designed to be a one-stop shop for securing your home. Essentially, it's a $249 infrared security camera that alerts your phone or tablet when it senses motion. Then, all you have to do is open the app to see a live video feed to determine if you need to call the cops. I've been testing the device out over the last month to see if it's enough for me to leave my home's security system off forever.

Once I'd found the right US-to-UK power adapter, the only thing required to set it up is to connect a 3.5mm audio lead (supplied) between Canary and your phone. When that's complete, you're given the choice of three modes, Armed, Disarmed and Privacy -- the latter option blocking the video feed. Whenever the camera senses motion, you'll receive a notification on your device to jump straight into the video feed, and from there you can either sound a pretty obnoxious alarm (trust me) or call the cops. The other feature that Canary offers is HomeHealth, which displays the ambient temperature, humidity and air quality on the home screen. It's hard to have an opinion about this either way, since I'm very rarely obsessing over the air quality in my own home. If I had one gripe, it'd be that not being able to switch the readout from Fahrenheit to Celsius was grating. (Update: I've now learned that it is possible to switch this, you just have to dig into the location settings menu)

In order to test Canary's person-sensing capability, I sneaked up on it and then leaped into its field of view. As expected, it registered me as an intruder, and the app instantly sprang to life to warn me of activity, but then made me wait (with a spinning clock animation) for the video to load. Once I got a "live" feed, however, I discovered the action was around 45 seconds behind the real world. I wondered if it was an intentional feature, but the company assures me that the feed should be live and in real time. Switching from WiFi to Ethernet didn't improve things either, so while the screen tells you that the feed is live, it rarely is.

If there's one quality I'd expect from a security device, it's reliability, but Canary has been spotty at best. Open the app and you'll sit there, staring at that spinning clock, wondering what horrors a malicious attacker is committing against your furniture. The company clearly needs to spend some time tending to its infrastructure, not to mention its mobile apps, which stopped working with the most recent iOS update. To finish this piece, I had to switch back to an iPad that was still running iOS 8.1, and the company's tech support advised me not to update my tablet until the app itself had been updated. When the feed does work, however, the stream is of excellent quality and with properly synced audio. Even better is that the infrared performance for nighttime surveillance is superb and I was able to watch the lack of goings-on in my kitchen in pure darkness.

There is, however, something that makes me wonder if I, or anyone else, should buy one of these devices at all. For instance, if I was burgling a home with a "Protected by Canary" sticker on the window, the first thing I would do is make a beeline for the Canary and pull the power cord. Sure, your phone would blow up and you may even rouse the authorities, but would that give me enough time to get away? What if your particular Canary is in your lounge, but your router is close to my entry point? If I pulled your internet connection, you'd be informed of an outage, but would probably wait for the power to come back on, at which point, I'd be long gone. The other issue, of course, is that I want a security system to operate as a digital perimeter for my home, hammering the police as soon as it's been breached. If I stuck this in my home office, for instance, then nefarious types could have already ransacked my bedroom, lounge and bathroom before being detected. Unless, of course, you're prepared to pay the $249 to protect each room of your home individually -- which could get expensive. It's this sort of question that makes me wonder if Canary's creators really thought about how their product would work out here in the real world.

Actually, I take that back. If you live in an apartment block or a studio flat, you can't really start adding door and window sensors without the consent of your landlord. In that context, a plug-and-play security solution might be the most cost-effective option to keeping your home secure. Cram it discreetly behind your couch or in the line of sight of your easily accessible front door and, should someone break in, you'll know about it.

Canary's a fine piece of hardware from a fine company that just needs a decent amount of love and attention. If you live in a small property in a big city, then you should certainly take a look. If, however, you own a home with more than three rooms and multiple points of entry, then Canary is more like a device that you think you should buy, rather than one you should actually buy.

In this article: Camera, Canary, Home, Homehealth, Indiegogo, Security, Sensor
All products recommended by Engadget are selected by our editorial team, independent of our parent company. Some of our stories include affiliate links. If you buy something through one of these links, we may earn an affiliate commission.