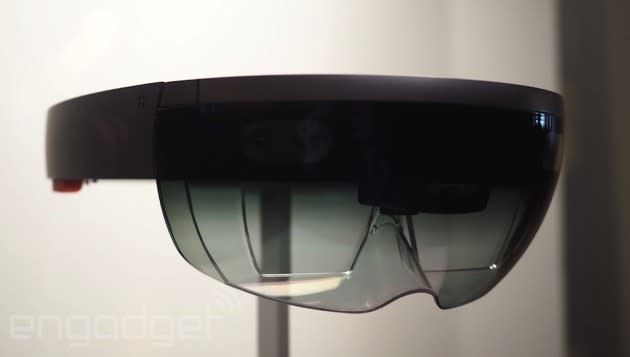 Microsoft surprised many when it announced it had acquired Mojang, maker of the hit game Minecraft for $2.5 billion. What could a company specializing in operating systems, business software and consoles do with an already popular sandbox game primarily enjoyed by children? The game's creator, Markus "Notch" Persson, certainly helped expedite the sale, but Microsoft had something else in its arsenal that was also perfectly suited to the game: HoloLens.

"Let's have a game that, in fact, will fundamentally help us change new categories," Nadella told the New York Times in an interview. "HoloLens was very much in the works then, and we knew it." Already, we've had a taste of what Microsoft might be planning with the game. In our brief time with HoloLens, we played Holobuilder, a game inspired by Minecraft that let us build a virtual world in the demonstration room and blow a (virtual) hole in the wall. During HoloLens' surprise January unveiling, Microsoft included Minecraft in its demonstration video, hinting that it would be the perfect showcase for the capabilities of its upcoming headset.

Obviously, Microsoft isn't new to gaming, but with rivals moving into different categories like virtual reality, the company has taken a different approach with HoloLens. Headsets like the Oculus Rift, HTC Vive and Samsung Gear VR work by tricking your eyes, but Microsoft's hoping that holograms, or more specifically augmented reality, will wow consumers by overlaying digital objects on a real world canvas. It's already received a lot of publicity, but Nadella knows that he has his work cut out: "I don't want to overhype it like Google Glass and say this is the next," he said. "I want us to be deliberate about what it is."

In this article: ar, augmented reality, hdpostcross, hololens, microsoft, minecraft, satya nadella, vr
All products recommended by Engadget are selected by our editorial team, independent of our parent company. Some of our stories include affiliate links. If you buy something through one of these links, we may earn an affiliate commission.