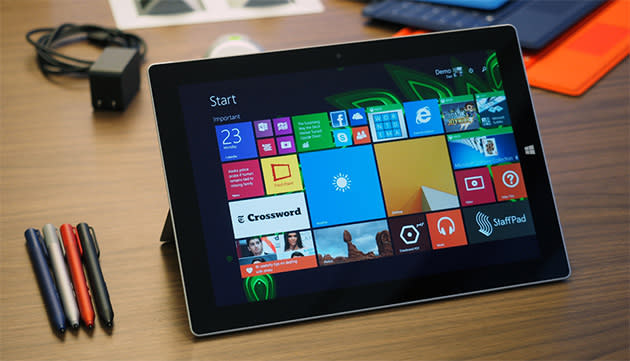 In love with the Surface pen? You're not the only one. Microsoft confirmed on its Surface blog this morning that it acquired the pen-sensing technology that helps power the Surface Pro 3 from the company that created it, Israeli tech outfit N-trig. If you're the type who pays attention to Israeli business newspapers, this whole thing might not come as a shock - Calcalist reported earlier this year that Microsoft was eyeing N-trig for a full-on acquisition that would see the company's 190 employees folded into the Microsoft mothership at some point. That's not the case anymore, though: We've been able to confirm the folks in Redmond just bought the technology, and not the whole company.

So, aside from a little M&A intrigue to spice up your Friday morning, what does this mean for you? Well, the Surface Pen is one of those bits of the Surface experience that seems totally extraneous at first, and then more-or-less lovely after you've gotten to play with it. It's far from perfect -- N-trig's pen ditched its predecessor's ability to erase stuff by flipping the thing around -- but the purchase signals Microsoft's commitment to making pen input something that could feasibly replace the traditional thumb-punching and finger-poking touchscreens have attuned us too.

It shouldn't be long before we see some of N-trig's tech in action, since Windows 10's launch is just over the horizon and we already know that some new Windows smartphones play nice with pens thanks to a feature called DirectInk. That we'll be able to write on a broad swath of new devices soon was never a question, though there is one loose end we haven't been able to tie up: What's going to happen to the rest of N-trig?

In this article: microsoft, n-trig, pen, surface, surface-pen, surfacepen, windows, windows10
All products recommended by Engadget are selected by our editorial team, independent of our parent company. Some of our stories include affiliate links. If you buy something through one of these links, we may earn an affiliate commission.