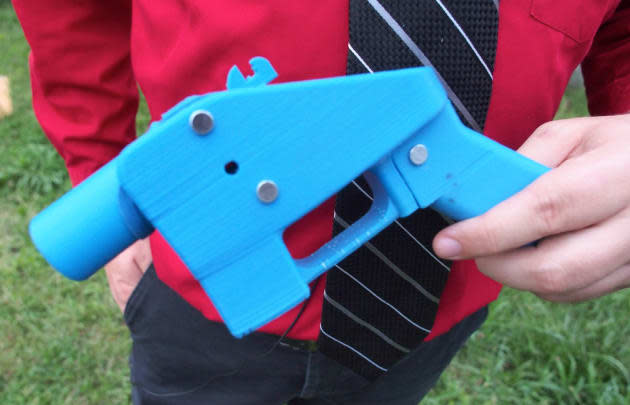 Cody Wilson fundamentally altered the way we produce and distribute firearms in 2013 when his company, Defense Distributed (DD), first published the plans for a 3D-printed pistol, dubbed The Liberator, on its website. The State Department didn't take too kindly to this revelation and sent DD a letter demanding the instructions be removed as they violated a number of US Arms Export control laws. Now, two years later, Defense Distributed and the State Department are going to court over the matter in a lawsuit that potentially holds far-reaching implications for both the First and Second Amendments.

Specifically, DD is suing an agency within the State Department called the Directorate of Defense Trade Controls (DDTC). The DDTC asserts that Defense Distributed's actions violated the International Traffic in Arms Regulations (ITAR), which regulate how weapons are sold and exported from the US. The problem is, these laws were designed when guns had to be machined and shipped out of the country in crates, not simply accessed from a home computer and printed. As such, Defense Distributed is arguing that its plans are not weapons but rather "speech" and therefore outside ITAR jurisdiction.

"The internet is available worldwide, so posting something on the internet is deemed an export, and to [the State Department] this justifies imposing a prior restraint on internet speech," Alan Gura, Defense Distributed's lead counsel, said in a statement. "That's a vast, unchecked seizure of power over speech that's...not authorized by our constitution."

On the other hand, intellectual property lawyer Ansel Halliburton previously argued in a TechCrunch article that while courts are typically very apprehensive towards "prior restraint" (a legal term for the act of censorship prior to publication), "the ability to download a file, press 'Print,' and have gun parts come out could also tip some judges toward calling gun CAD files functional things and allowing the government to regulate them." However, just look at how futile the regulation of digital contraband has been since the days of Napster. Even if the Feds manage to yank DD's plans from its site, that data is already in the wilds of the Internet and that's one Pandora's Box that will never be shut again.

In this article: 3D, 3DPrinting, DDTC, defensedistributed, DepartmentofState, firearms, guns, handguns, ITAR, Liberator, Napster, PandorasBox, StateDepartment, TechCrunch, weapons
All products recommended by Engadget are selected by our editorial team, independent of our parent company. Some of our stories include affiliate links. If you buy something through one of these links, we may earn an affiliate commission.