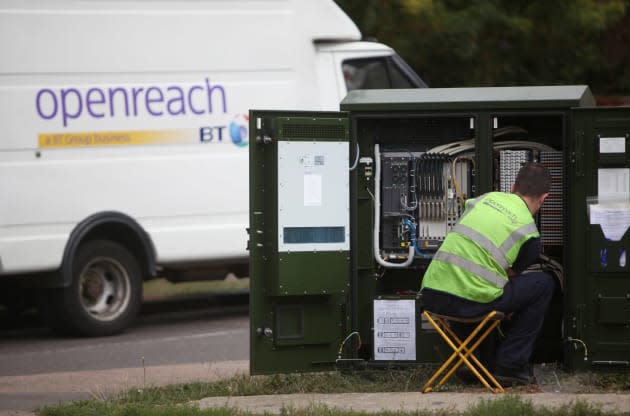 We all want super-fast internet in our homes, but for many people that's borderline impossible, because there's no fibre optic infrastructure in their area. When they're told that a connection is finally available, it can also feel like forever before engineers set up the line. If you've ever been in a similar situation, then you might be interested in Ofcom's latest proposals. The regulator is considering new rules that would force Openreach, a BT-owned division that manages UK broadband connections, to react faster to new "leased line" orders from business customers (which includes internet service providers).

In 2014, Openreach failed to meet the delivery dates it had promised its business customers in 55 percent of cases. Ofcom's new proposals would force them to make their targets in 80 percent of cases by 2016, followed by 85 percent by 2017 and 90 percent by 2018. The regulator is also considering a new maximum length of time between a provider pressing order and their connection being ready. At the moment, it takes Openreach roughly 46 working days to prepare a line -- up from 40 days in 2011. Ofcom's proposals would set the 46-day figure as an absolute upper limit, effectively banning the company from taking longer. The figure would then be reduced to 40 days in 2017.

They're small changes, but ones that could accelerate the availability of fibre optic broadband. Today, Ofcom is opening its proposals up to consultation; following feedback, it'll make a decision early next year, before putting it into effect in April 2016.

In this article: broadband, bt, fibre, fibre optic, internet, network, ofcom, openreach, regulation
All products recommended by Engadget are selected by our editorial team, independent of our parent company. Some of our stories include affiliate links. If you buy something through one of these links, we may earn an affiliate commission.