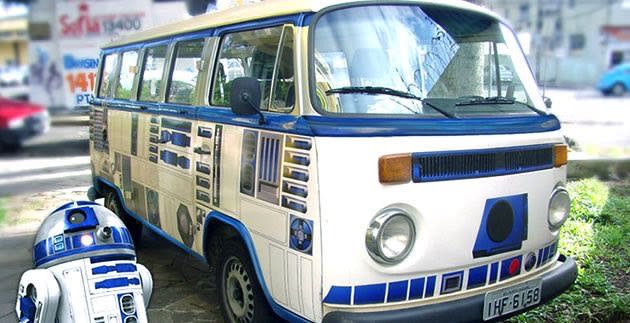 Tesla's on a roll lately -- it's planning to reveal a $35,000 electric car next year, and it just unveiled a home battery that could take your house off the grid. But if you're hoping to get in on the paradigm-shifting technology, you might have to wait -- the Powerwall home battery is sold out through 2016. The enormous level of interest in the batteries has translated to $800 million worth of reservations, begging the question: Can Tesla's battery hit $1 billion in sales faster than the iPhone? On the topic of the iPhone, Apple is seriously greening up its act. Back in 2011, Greenpeace named Apple the least clean tech company. Now, just four years later, Apple rates as the greenest tech company of all. Part of the reason for that improved rating could come from Apple's partnership with World Wildlife Fund in China to create sustainable forests.

On the green energy front, a startup called Move Systems is working to bring 500 solar-powered street food carts to NYC. The carts come equipped with solar power, rechargeable batteries, plug-in hybrid technology and alternative fuel hookups. Hawaii is aiming to become the first US state to run entirely on renewable energy. If the measure passes, the state would get its energy from a mix of solar, wind, hydro, geothermal and biomass facilities. And is this the world's most efficient solar system? Ripasso has developed a massive sunlight-concentrating disc that converts 34 percent of the sun's energy into electricity -- that's twice as much as traditional solar systems.

California is still gripped in its worst drought in recorded history, and it shows no signs of stopping any time soon. It's gotten so bad that San Diego County is building a massive $1 billion desalination plant -- the largest of its kind in the Western hemisphere. In response to the drought, Starbucks announced last week that it will stop sourcing water from California, and it will begin bottling its Ethos Water in Pennsylvania instead. But despite the severity of the problem, not everyone is working to conserve water. Nestlé CEO Tim Brown actually wants to increase the company's bottled water operation in California, and new aerial photos reveal that some of Hollywood's biggest stars are still pumping loads of water into landscaping to keep their estate grounds lush and green. To deal with the ongoing drought, Inhabitat has rounded up 10 possible solutions, ranging from wastewater recycling to fog catchers.

When you step into a self-driving car, you want to be fairly certain that the technology is sound -- and above all, that the car is safe. So on the surface, it might seem concerning to learn that Google's self-driving cars have been involved in a total of 11 minor accidents. But there's good news: Google says the autonomous cars weren't at fault in any of the accidents. In other transportation news, a Brazilian Star Wars fan created the ultimate tribute: a VW camper van retrofitted to look just like R2-D2! San Francisco is paving the way for bicycle safety by constructing new bike lanes that are raised two inches above the rest of the street. Parallel parking is one of the more difficult maneuvers asked of urban drivers, but the German Research Center for Artificial Intelligence has produced a vehicle that makes it easy to parallel park in even the tightest of spaces. The EO Smart Connecting Car 2 can drive sideways, change its shape and even shrink itself to fit in smaller spaces. On the topic of mobility, a mobile garden with a wall of flowers and edible plants rolled into Expo Gate Milano last week. And on the interplanetary travel front, The Planetary Society is preparing to launch a test flight of the solar-powered LightSail spaceship that Carl Sagan dreamed up 40 years ago. The first test will take place on May 30th.

In this article: apple, batteries, drought, eco-friendly, green, inhabitat, InhabitatsWeekInGreen, solar, star wars
All products recommended by Engadget are selected by our editorial team, independent of our parent company. Some of our stories include affiliate links. If you buy something through one of these links, we may earn an affiliate commission.