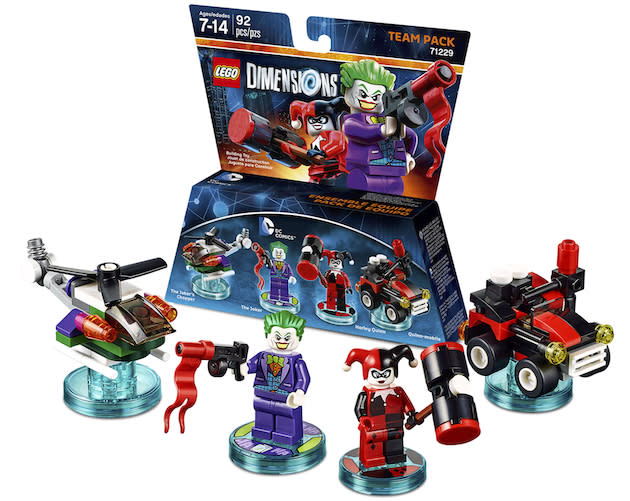 Lego has something up its sleeve to lure you away from Skylanders and Disney Infinity: future-proofing its toys-to-life-game, Lego Dimensions. Along with the announcement that a handful of new figures will be sold in "Team" and "Fun" packs, the press release wasn't afraid to get passive aggressive about what separates it from the competition:

"Future expansion pack purchases will continue to work with the LEGO Dimensions Starter Pack, even in the fall of next year. No compatibility chart necessary."

That last portion refers to the aforementioned games' need to point out what does and doesn't work between different expansions and figurines in each game. Cheeky, yeah? That means the Joker and Harley Quinn minifig/vehicle Team Pack, and Superman and Bane minifig/vehicle Fun Packs won't have any trouble getting along with anything released in the future, it sounds like. Nor will a certain Timelord when he meets the likes of Doc Brown of Back to the Future fame and some more Ninjago characters. So! In theory you could have Bane driving the Delorean in the Hill Valley set or Harley Quinn rolling through The Simpsons' Springfield with Chell from Portal. Sounds a whole lot like last year's Lego Movie, right? That's probably intentional. And if you need more movie magic, peep the video below and watch Doc Brown himself, Christopher Lloyd, show you how Dimensions' inter-operability gets down.

In this article: Aquaman, BackToTheFuture, bane, Batman, DocBrown, gaming, HarleyQuinn, hd, hdpostcross, Joker, LEGO, legodimensions, PlayStation, Playstation4, ps3, ps4, superman, video, xbox, Xbox360, XboxOne
All products recommended by Engadget are selected by our editorial team, independent of our parent company. Some of our stories include affiliate links. If you buy something through one of these links, we may earn an affiliate commission.