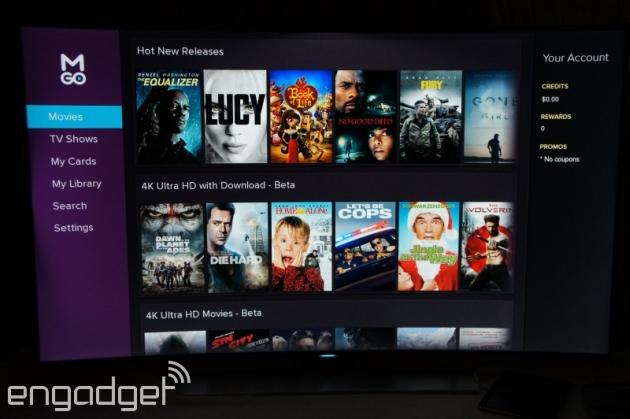 At CES the long-brewing alliance to push Hollywood movies you can legally download, store and play across different devices finally surfaced, and now its system has a brand name: Vidity. As we learned in January, this is the doing of the Secure Content Storage Association -- a team up behind movie studios (Fox, Warner Bros.) and storage manufacturers (Western Digital, Sandisk) to create a system where users can download movies in the highest possible quality like 4K Ultra HD and HDR. Samsung was the first to announce its Ultra HD TVs with the M-Go app will use the spec, but other big names like Vudu, Kaleidescape, LG, Universal, Comcast and Sprint are on board too. So far 4K movies have generally been all about streaming, but now between Ultra HD Blu-ray and Vidity there are a couple of new options coming.

With the spec and brand name locked down, Vidity GM David Huerta tells us compatible products and services should roll out later this year. Other than just top-quality audio and video, the main feature of Vidity is that it's intended to work across devices, from TVs to PCs to phones and tablets. The concept of it works a lot like the digital distribution schemes we've seen for videogames, with the ability to copy or move the files and still play them elsewhere.

Of course, it seems doubtful that anything Hollywood is behind will be quite as easy as piracy, and we're still waiting to see if all of the studios will be involved -- as I mentioned, Fox and Warner are founding members and Universal is involved, but will Disney join in? If viewers can experience more control and convenience plus high quality playback and access to hit movies, Vidity (check out the FAQ for some details) will be a major step forward and fit in nicely next to discs and streaming.

For those still willing to buy their movies legitimately, it shouldn't be hard to maintain an archive, or watch them on a flight away from an internet connection. Currently, simple things like downloading a purchase pre-release or just keeping a copy to play anywhere aren't possible or easy to move across different devices, but this could change all of that that. It's built into platforms like Steam, PlayStation and Xbox, so there's no reason it shouldn't be there for movies too.

In this article: 4K, download, DRM, Fox, hdpostcross, hollywood, phenix, Sandisk, SCSA, UltraHD, Vidity, WarnerBros
All products recommended by Engadget are selected by our editorial team, independent of our parent company. Some of our stories include affiliate links. If you buy something through one of these links, we may earn an affiliate commission.