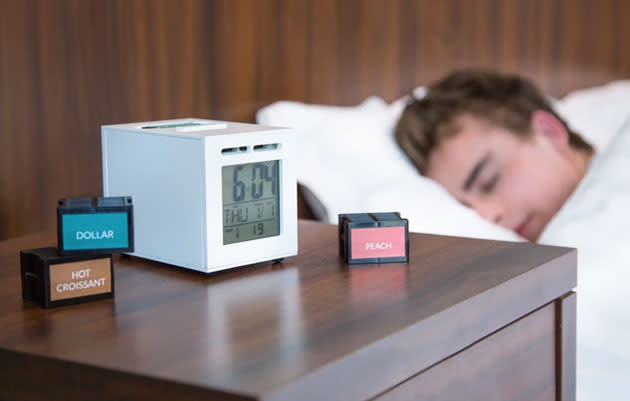 If we were rich, we'd pay gourmet baker Richard Bertinet to rouse us every day with the scent of his freshly baked bread. Unfortunately, we're not, which is why SensorWake's smell-based alarm clock is such an exciting prospect. Rather than waking users up with the traffic report, the device uses a cartridge of odors to get you out of bed in the morning, from coffee and croissants all the way through to the smell of US dollars.

The project was created by 18-year-old engineering student Guillaume Rolland and was named a "top 15" invention at last year's Google Science Fair. Now, the company is taking to Kickstarter to raise cash for an initial production run, with deliveries expected to begin in November. If you're interested in getting your hands on one of these devices, then early birds can snag one for €60 (around $65), with two capsules of your choice. When a capsule expires, you'll be able to replace it for $7.50, with each one rated to last roughly two months at a time.

In this article: AlarmClock, GuillaumeRolland, Kickstarter, SensorWake, Smell, video
All products recommended by Engadget are selected by our editorial team, independent of our parent company. Some of our stories include affiliate links. If you buy something through one of these links, we may earn an affiliate commission.