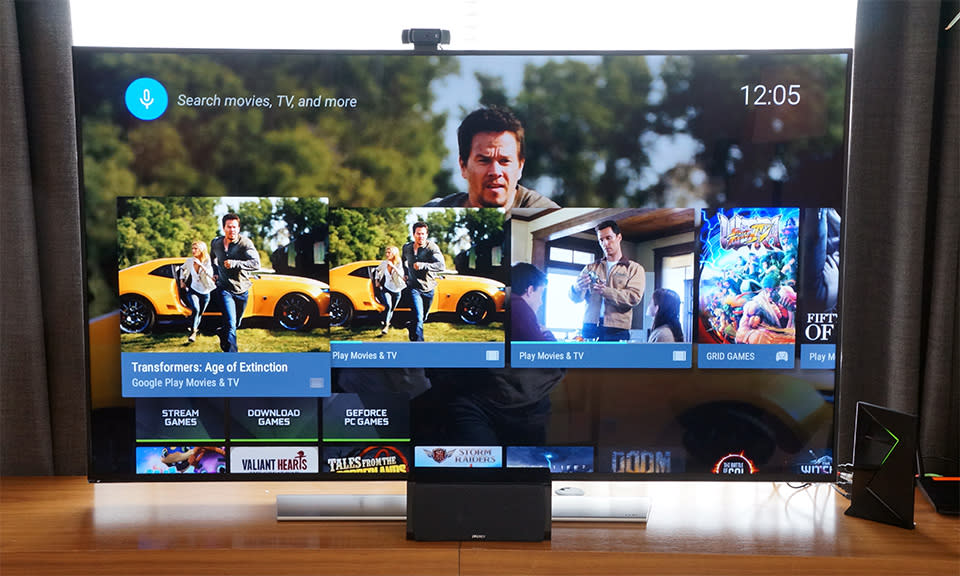 I wanted to watch The West Wing, so I asked for it. I wanted to play Asphalt 8 on my TV, so I downloaded it. I wanted people to see me playing a copy of Street Fighter X Tekken I didn't (strictly speaking) own, so I broadcasted it. All of these little interactions -- some mundane, some seemingly strange -- are what make using NVIDIA's Shield Android TV box such a tantalizing experience. At its very core, it's not all that different from the Nexus Player we saw last year, with an added veneer of NVIDIA gamer-friendliness. It's that extra dose of ambition, though, that makes the Shield the most interesting Android TV box you'll find out there right now. I've had the thing hooked up to my TV for five days and haven't completely put it through its paces yet, but read on for a taste of what it's like having a Shield-powered living room. We can zip through the broad strokes pretty quickly. With sharp, angular lines and a pulsating green light (I think of it as an eye) etched into its side, the Shield would be downright imposing if it weren't the size of a paperback. Setting up the Shield for the first time? Dead simple. Its back is festooned with connections: three full-size USB ports, one micro-USB, an HDMI-out, a Gigabit Ethernet jack and a slot for a microSD card. That last bit will come in handier for some of you than others, since the Shield comes in two flavors: a $199 version with 16GB of internal storage and a $299 model with 500GB of space. Once everything's connected, you'll be prompted to log in with your Google account, et voilà: you're all set.

If I'm being honest, Android TV hasn't changed all that much since we first saw it last year -- your apps, content and settings are laid out in rows you can navigate with the included Shield controller, but the magic really happens when you thumb the green NVIDIA logo. Once you do that, it's time to search for something, anything using your voice, and that's where Android TV seriously shines. Oscar winners from 1995? Recent movies starring Chiwetel Ejiofor? Game Sack? Shield picked up on every one of those requests with ease and brought up a slew of content cards related to those requests. If anything, it seemed a little more accurate than when we mucked around with the Nexus Player, which would occasionally throw in a few off-the-wall cards for reasons we couldn't quite crack. We have, however, figured out how some errant bits fit into the TV experience. Remember that "Live Channels" Android TV app that popped up in the Play Store late last year? The one that basically promised to route actual, live television through your tiny Android box? Well, if you hook a TV tuner like the ones made by SiliconDust up to a Shield, the app will become accessible and you'll be treated to a sleek, blue interface showing off what's playing. What's more important, you'll actually be able to watch those shows live -- some people figured out the right tuner would kinda, sorta unlock that functionality on the Nexus Player, but it couldn't properly decode high-definition broadcast video. If you're like me, though, you've got a pricey cable contract and little need for a standalone TV tuner setup. If we take a step back from there, we're left with my major Shield sticking point: In order to squeeze the most out of the thing, you'll need some extra hardware. The Shield, for instance, is the first Android TV box to support 4K video streaming thanks to working relationships with companies like Netflix. Hook up a Shield to a 4K television, fire up Netflix, and you'll see certain titles highlighted with an UltraHD badge -- one quick click from there and you're watching House of Cards in glorious super-high resolution. (Other UHD content providers, like Amazon, haven't made their stuff available here yet). Thing is, I don't have a 4K television. Most people in the US don't, though we're finally getting to the point where you can buy one without melting your credit card. All the videos I tried in a hotel suite with NVIDIA reps floating around looked gorgeous, but it's not something many of us will be able to immediately appreciate. I don't have one of NVIDIA's GTX-series graphics cards either -- again, like most people -- so the finer points of streaming games straight from my PC to an Android set-top box were lost on me. Even the excellent Shield remote control, which feels really sturdy and has a great microphone, will set you back an extra $50. I'll be putting those features through the wringer in our full review (coming soon!), but I was still pretty pleased with the out-of-box gaming experience Shield brings to your TV stand. Titles like SoulCalibur, Asphalt 8 and even Doom III ran great on my 47-inch LG thanks to the Tegra X1 chipset and the 256-core Maxwell GPU thrumming away in that angular body. The number of games optimized to run with this sort of horsepower on screens this large is still modest, though graphically intense games like Metal Gear Rising: Revengeance and Half-Life 2: Episode 2 are currently slated for summer launches. At this point, it's honestly hard to say if the Shield has the chops to depose full-blown game consoles, but it's sure as hell trying.

The biggest gaming question mark for me was whether or not I'd be able to use NVIDIA's Grid cloud gaming service, which promises to let you play games powered by remote hardware at full HD and at 60 frames per second. My home router -- a mostly new Apple Airport Extreme -- definitely wasn't one of the models NVIDIA recommended for Grid use. A bit of on-screen griping later, and I still managed to play through several rounds of Street Fighter X Tekken without too many dropped frames, though I spent most of my time laying down Hurricane-Kick-to-Hadouken-to-Dragon-Punch combos on computer opponents. We'll see what happens when we drag other humans into the mix, but I was a little shocked at just how well everything worked considering my subpar setup.

It's been less than a week, but I'm utterly intrigued by this new Shield. The original was a clunky portable that turned out to be a seriously hardy gaming companion. Its successor of sorts wound up being one of our favorite Android tablets. I'm withholding final judgment for just a little while longer, but it feels like the third time for NVIDIA really might be the charm, and that's saying something.

In this article: android, android tv, google, googleio2015, hdpostcross, nvidia, shield
All products recommended by Engadget are selected by our editorial team, independent of our parent company. Some of our stories include affiliate links. If you buy something through one of these links, we may earn an affiliate commission.