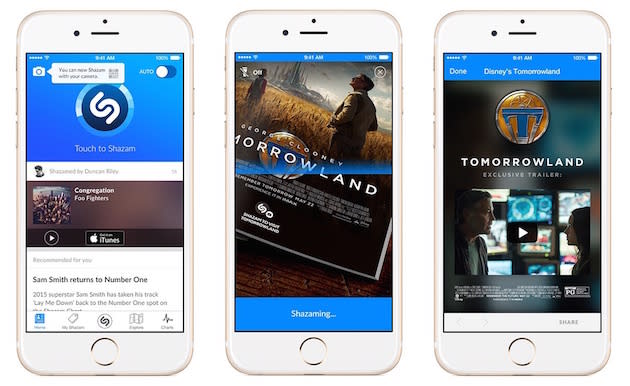 It's true: Shazam's adding more useful features to its application, as was reported by Reuters back in March. Now, the famed discovery software can identify more than music, movies, TV shows and commercials, which has been the core functionality to date. With this new version, introduced today, Shazam is capable of recognizing packaged goods (like a Blu-ray or themed toys), books and magazines, as well as other merchandise that's typically available at physical retail stores. To use it, the only thing you have to do is open the app on your iPhone/Android smartphone, fire up the camera and, lastly, point it toward a compatible item's Shazam-printed logo or QR code. So far, the company's only teamed up with a handful of brands, including Disney, Levi's and HarperCollins, to demonstrate the powers behind visual Shazam -- although more are expected to enable their products in the future. One example of how this works is a magazine ad for Tomorrowland, starring America's aging heartthrob George Clooney, which can be scanned with the application and, in a matter of seconds, brings up a trailer for the film. Shazam CEO, Rich Riley, says it's not only about keeping users engaged to his service, but also letting firms connect to customers with the single tap of a button. The idea, ultimately, is to transform "static images into dynamic pieces of content."

In this article: hands-on, mobilepostcross, Shazam, Shazam Visual, ShazamVisual, Visual Recognition, Visual Shazam, VisualRecognition, VisualShazam
All products recommended by Engadget are selected by our editorial team, independent of our parent company. Some of our stories include affiliate links. If you buy something through one of these links, we may earn an affiliate commission.