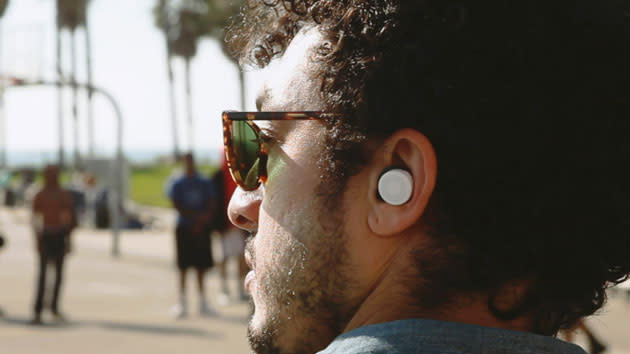 Your choices for filtering the sounds around you are typically quite limited: you either have to drown it out (such as through earplugs or headphones) or let all the annoyances in. Doppler Labs might soon have a way to be more selective, though. Its crowdfunded Here Active Listening earbuds are meant solely to control what you hear in the real world. You not only decide how much gets through, but how it gets through. There's an equalizer if you want to tweak certain sound frequencies (toning down the bass at a badly-mixed concert, for example), and there are preset filters designed to tune out common noises or add effects. Want to silence the background hum of your office without completely shutting out your coworkers? You probably can.

This kind of control won't come cheap or quickly. Doppler is asking for at least a $179 pledge (you'll most likely have to pledge $199) to get a pair of Here buds, and you'll have to pay $249 at normal pricing. Crowdfunded units won't ship until December, for that matter. And don't forget that these earbuds aren't meant for your own music -- you'll need to switch to more conventional audio gear if you're up for some private listening. If you've ever had to endure a screaming baby on a long-haul flight, however, that potential for peace and quiet might justify the cost.

In this article: audio, doppler, dopplerlabs, earbuds, hearing, here, hereactivelistening, sound, wearable
All products recommended by Engadget are selected by our editorial team, independent of our parent company. Some of our stories include affiliate links. If you buy something through one of these links, we may earn an affiliate commission.