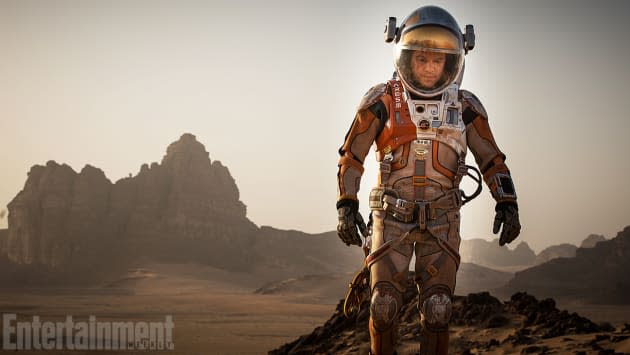 What do you do when you're stranded on an alien planet all by yourself? Engage your engineering skills -- or die. That's the basic plot of The Martian, the latest film by Ridley Scott (Alien, Blade Runner), based on Andy Weir's hugely successful self-published novel. The film stars Matt Damon (who, apparently can't catch a break on far-off planets these days) as an astronaut who gets left behind on Mars by his crew. Originally thought to be dead, he ends up inspiring a long-shot rescue mission. The only problem? He still has to survive on his own for several years. While the book wasn't exactly well-written, it was notable for its commitment to scientific accuracy. It basically reads like an engineer's handbook for surviving on Mars. Judging from this trailer, it looks as if Scott's lush aesthetic style could end up elevating The Martian from its source material. Then again, we also got excited for Prometheus, and look what happened there. The Martian hits theaters on November 25.

In this article: hdpostcross, RidleyScott, TheMartian
All products recommended by Engadget are selected by our editorial team, independent of our parent company. Some of our stories include affiliate links. If you buy something through one of these links, we may earn an affiliate commission.