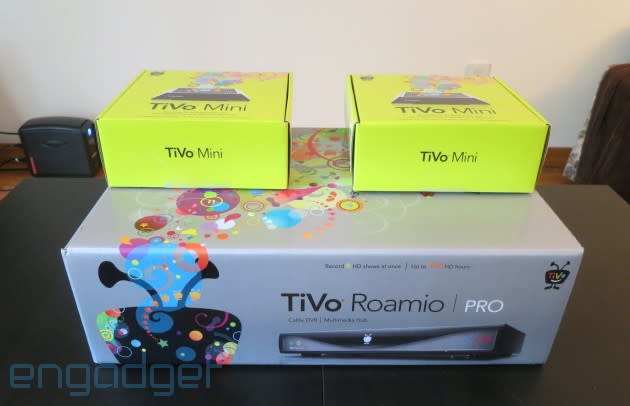 We still haven't progressed to TiVo's cloud DVR future, but the company is jumping ahead with the launch of TiVo Online. That is the name of its new web portal that collects video from cable channels, internet sources and even your TiVo DVR (if you have one), to put TV on your computer easily. The interesting part is that it's usable by anyone, but you'll get a lot more out of it if you have cable, and/or a TiVo DVR. Also, TiVo just launched upgrades bringing Plex, iHeartRadio and Yahoo Screen to its boxes. We took TiVo Online for a spin and on the plus side, it's a welcome improvement from the web features TiVo has offered so far, but it has a few drawbacks. The good news (for TiVo owners) is that you can do most of the things you expect, like manage recordings, search for TV shows and even create the new OnePass setups that pull from TV and internet sources. The bad news is that on the web, it only searches the sites that are available so far or regular TV, so there's no way to see if something if it's on Netflix or Amazon Prime, for example. In-home streaming works across devices if you have a newer Roamio DVR, or one of the older ones with a Stream attached. That even includes ChromeOS (although it pops up a warning when you first try to log-in citing "reduced functionality"), although the quality is just acceptable. Until now, the company hadn't done much to update its online interfaces, which were mostly the same as they were in 2010 and in 2006 when it was called TiVo Central Online, so at least this is something.

According to the accompanying PR, a way to stream or download TV even when you're away from home (on PCs, it's already possible via apps) is in the works, but it might be tied to just a single device at a time, and may not work with every show because of DRM.

I think the idea is to create something that not only works for TiVo users, but also pulls in viewers who haven't purchased a TiVo yet. It already had a similar setup for RCN customers with TiVo, but now it's available to anyone. On the second point they still have some work to do (if you need a way to find what's on streaming, check out our list here), but if you already have a TiVo it's a convenient way to watch on your laptop.

In this article: dvr, hdpostcross, InternetTV, portal, streaming, tivo, tivoonline, TV, video
All products recommended by Engadget are selected by our editorial team, independent of our parent company. Some of our stories include affiliate links. If you buy something through one of these links, we may earn an affiliate commission.