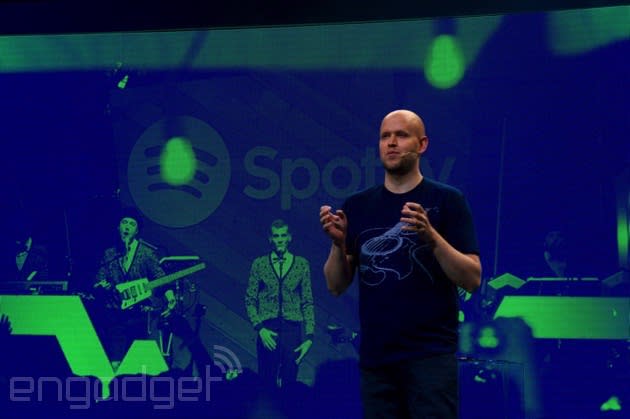 Now that Apple is launching a streaming music service, Spotify is going door-to-door to drum up backing for its forthcoming war. Of course, it doesn't need moral support as much as cash, and investors must think it's a safe bet, since they've stumped-up $526 million to the company's fighting fund. As the Wall Street Journal reports, that means that finance-orientated types believe that Spotify is worth more than $8.5 billion -- a pretty penny for a business that's never made a profit.

Spotify doesn't just have the looming threat of Apple on its mind, since the company recently opened-up its service to podcasts and video. Rather than simply being a place where you can get a big chunk (but not all) of the tunes you want for a monthly fee, the firm has an eye on a more radical transformation. It's entirely plausible that the Spotify of the future is a one-stop shop for all of your video and audio needs like a mutant cross of YouTube and iTunes.

The company also wants to win the hearts and minds of its users by going on something of a positive PR campaign. The first official missive from the outfit is to reveal that it has more than 75 million users and 20 million subscribers, not to mention that it has paid out more than $3 billion in royalties for their music.

We won't bore you with the list of which equity funds and bored rich people have kicked in the moolah, since we haven't heard of any of them either. Oh, except for TeliaSonera, which is the biggest phone company in both Sweden and Finland. Given that Spotify was founded in Stockholm, that's not exactly the biggest surprise -- after all, you've gotta cheer on your hometown hero.

In this article: apple, AppleMusic, Business, Investment, Music, Spotify, Streaming
All products recommended by Engadget are selected by our editorial team, independent of our parent company. Some of our stories include affiliate links. If you buy something through one of these links, we may earn an affiliate commission.