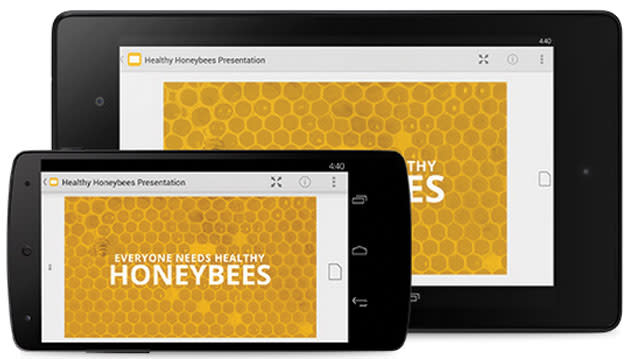 Fancy Google Slides over PowerPoint for your super exciting presentations? Well, if you've been using a cord to get your work on the big screen in the office, that task is about to get a whole lot easier. The folks over at Android Police discovered that with a forthcoming update, Slides will allow you to beam your info for all to see to a Chromecast from an Android device. On the desktop, you can already leverage Google's diminutive dongle for presentations thanks to the Google Cast Chrome extension.

Once you select the streaming accessory, the app turns into a remote control of sorts, offering a timer to let you know how long you've been on the current slide. It also displays a thumbnail for the current slide in addition to a small preview for both the previous one and next item in the queue. The feature hasn't made it to the app yet, but if you don't want to wait, you can nab the APK via the source link below. With this being the Android APK, there's no indication when the feature will arrive for Slides on iOS, but I'd guess it'll happen soon enough.

Update: Google made things official with a blog post this afternoon. It also announced that Slides would support AirPlay too, so you can show presentations with that wireless tech as well. That also means that iOS support arrived a lot sooner that we thought.

In this article: apk, chromecast, google, googleslide, presentation, slides
All products recommended by Engadget are selected by our editorial team, independent of our parent company. Some of our stories include affiliate links. If you buy something through one of these links, we may earn an affiliate commission.