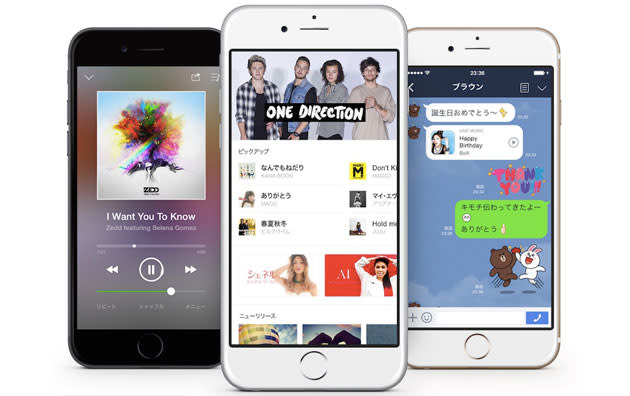 When messaging giant Line signaled its intent to jump into music by acquiring Microsoft's MixRadio, it wasn't kidding around. Meet Line Music, a streaming music service for Japan that (to no one's surprise) is tied closely to the company's chat app. You can not only share tunes in your discussions and on your timeline, but play them without switching apps -- helpful if you want to talk about a new playlist while you're listening to it. The low pricing might also reel you in. It costs just ¥1,000 ($8) per month for unlimited access, and you can get away with ¥500 ($4) if you listen less than 20 hours per month. Students pay as little as ¥300 ($2). Line Music is available right now for Android and iOS users, and there's a web version launching in July.

The service only has 1.5 million tracks at the moment (it should have over 5 million later this year), and there's no mention of international expansion just yet. However, its real challenge might be changing attitudes toward digital music on Line's home turf. Unlike many other parts of the world that have embraced downloads and streaming with open arms, Japan's music sales are still dominated by CDs -- in fact, online music sales have dropped in the country over the past five years. Line's sheer ubiquity might put its new offering in front of a lot of people, but it's far from certain that they'll sign up.

In this article: android, internet, ios, japan, line, linemusic, mobilepostcross, music, streaming
All products recommended by Engadget are selected by our editorial team, independent of our parent company. Some of our stories include affiliate links. If you buy something through one of these links, we may earn an affiliate commission.